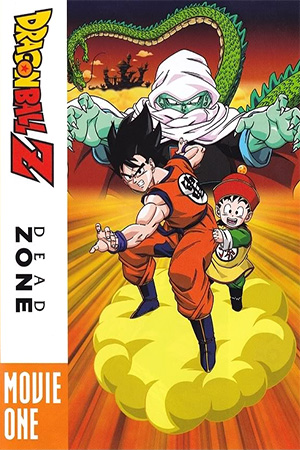 In his quest to obtain eternal life, the vile Garlic Jr. sets about collecting the seven Dragon Balls that will grant their owner any wish. Before he completes his mission however, he thinks it best to take down the all-powerful Piccolo and also winds up kidnapping Gohan along the way. This brings Goku rushing to his aid but he arrives at the fortress just as Garlic Jr. is completing his wish. Now Goku will have to muster all of his powers if he is to have any chance of taking down this almighty opponent.

‘Dragon Ball Z: Dead Zone’ acts as a prelude to the television series and therefore contains no significant story advances or spoilers. With a running time of just over 40 minutes, it’s a fairly brief adventure that tells the somewhat familiar story of a villain (who bears a striking resemblance to Emperor Pilaf) looking to use the Dragon Balls for personal gain. Obviously this means that the film isn’t exactly overflowing with originality or depth, but it does still make for an enjoyable burst of fun that showcases a number of entertaining interactions between the characters. It also has to be said that the animation, while perhaps a bit more old school, does look sharper than the series.

If you’re a longtime fan who has just come looking for more fight scenes then ‘Dead Zone’ should be right up your alley. As the movie has a rather basic setup, it isn’t long before the confrontations begin and we get to see Goku, Piccolo and even Kami forced into action. Admittedly the majority of the fights are relatively tame, but it is still interesting to return to a point in the show when there was more reliance on hand-to-hand combat rather than special powers. This is particularly applicable to Goku who uses quite a few martial arts-esque moves and even gets to cut loose with his staff. The only minor disappointment comes during the final fight, which not only feels a little unsatisfying but also creates some continuity issues with the series timeline.

While it is undoubtedly just a filler footnote in the ‘Dragon Ball Z’ universe, ‘Dead Zone’ still makes for an enjoyable watch that is likely to please fans of the franchise. Interestingly, it also remains the only movie to actually see a continuation in the series, with the brilliantly named Garlic Jr. reappearing in a later arc.