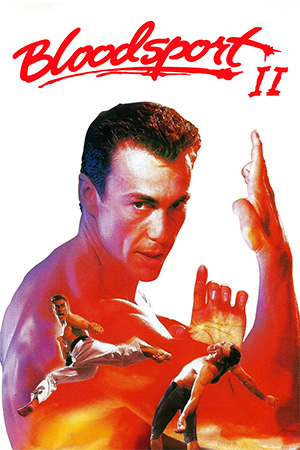 After the success of the original ‘Bloodsport’, Jean Claude Van Damme went onto become a pretty big star worldwide and appeared in increasingly bigger budget films. As a result, I assume he declined the invitation to appear in this lo-cash sequel. Replacing JCVD in the lead role, and making his movie debut, is ex-model Daniel Bernhardt who does surprisingly well considering he was chosen for his physical similarity to JCVD, and that the movie was just a blatant cash-in.

As Van Damme did not return, the character of (the real life) Frank Dux was replaced, and Bernhardt plays the role of petty thief Alex Cardo. I found this an odd decision considering that Bernhardt looks so similar to JCVD and was apparently chosen for this reason.

Alex winds up being incarcerated in a Thai jail after being set up trying to steal an ancient sword. In prison, he meets a wise old man “Sun” (James Hong) who persuades Alex to change his life and learn to be honest, patient and honourable. As well as this noble attitude, Sun also teaches Alex the ‘Iron Fist’ fighting technique (spot the irony) through a series of training methods lifted straight from films like ‘Kickboxer’. Ultimately, Alex is released from prison thanks to a rich business tycoon (Pat Morita) in return for fighting in the Kumite to return the, still missing, precious sword. Brilliant! Another original plot upon to which to place a sequence of gratuitous fight sequences!

Casting the atrocious plot to one side, this film is actually a notch above the original in terms of action. In fact, half the film’s running time is probably spent in the kumite itself. Almost every martial art possible is represented, and most of the performers do a very good job. One in particular, Ron Hall, displays some impressive speed and kicking techniques and I’m surprised he hasn’t been used more often in martial arts movies. As with the original ‘Bloodsport’, the fights are all one-on-one, and relatively short but are some of the better examples of “American style” fight choreography.

In conclusion, ‘Bloodsport II’ is an improvement over its predecessor due to the greater quantity (and quality) of the action. However, the original is still considered a classic due to the 80’s campness and people’s rose-tinted memories, making this sequel slightly redundant. Bernhardt is fairly impressive, and almost the spitting image of JCVD at times. He went on to make 2 further sequels in this franchise, and can be seen more recently as Agent Johnson in ‘The Matrix Reloaded’.