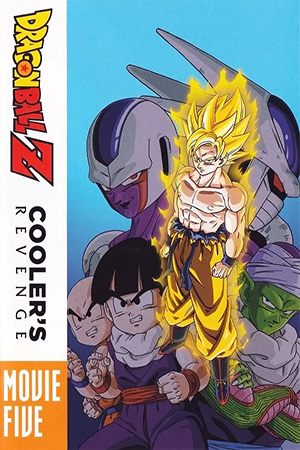 Having finally triumphed over Frieza on Planet Namek, Goku and the gang return home for a little well-earned rest and relaxation. However, Frieza’s brother Cooler is out for vengeance and he takes his Armoured Squadron to Earth with the intention of killing Goku and reclaiming his family’s honour. Now Goku will have to find the power within him to defeat a warrior stronger than any opponent he has faced before.

Set directly after the Frieza arc, ‘Cooler’s Revenge’ is a fairly predictable bit of filler that springboards off the series storyline. This means that rather than including the usual handful of faceless villains, the movie’s main antagonist just so happens to be Freiza’s (previously unheard of) older brother. As you might expect, this little plot “twist” is something of a stretch and it doesn’t exactly help that this supposed super being is beaten in a fraction of the time it took to defeat Freiza. Of course, this being a ‘Dragon Ball Z’ movie I highly doubt that many viewers will take the time to over-analyse the concept, but it certainly feels like this one was crafted on a day when the writers were looking to knock off early.

Putting the plot to one side, it’s likely that ‘Cooler’s Revenge’ has just enough action to keep hardcore fans interested. For a change, it is Piccolo that gets to take centre stage during the opening henchmen battles and these include some nicely animated punch-ups and special moves. When the going gets tough though, it all comes down to Goku and he is the one that is left to deal with Cooler himself. Although it probably lasts for a good 15 minutes, I couldn’t shake the feeling that this final battle seems a little rushed. Cooler opts to jump to his ultimate form almost instantly and then it’s really just Goku getting the stuffing knocked out of him until he finally manages to whip out his Super Saiyan powers.

‘Cooler’s Revenge’ is another entertaining if somewhat average ‘Dragon Ball Z’ movie that, much like most of the previous outings, is a film that is probably better suited to the existing fanbase. Most of what it has to offer is formulaic to say the least, and there probably isn’t anything particularly outstanding or original enough to bring newcomers into the fold.