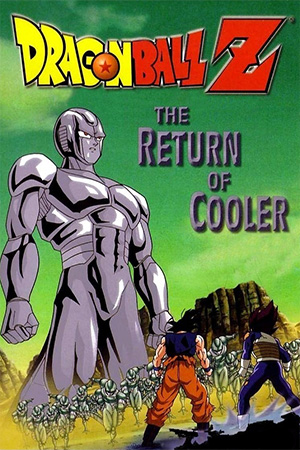 When New Namek is suddenly attacked by an unidentified planet, Earth’s guardian Dende senses the plight of his people.  As is often the case, he calls upon Goku for help and the usual band of heroic warriors set out on yet another adventure. After enduring a fairly tedious journey, they arrive on the planet and encounter an army of robots who are looking to use the Namekians as fuel for their spaceship. Goku demands that the robots leave peacefully, but their leader emerges and states himself to be “Cooler”. It appears that somehow a powerful enemy has been resurrected, and now Goku will be forced to defeat him all over again.

If you read my review of ‘Cooler’s Revenge’, then you’ll no doubt be aware that I wasn’t exactly thrilled by the emergence of Frieza’s long-lost brother, Cooler. As you can imagine, seeing his name in the title for this follow-up immediately got my gears grinding, especially when you consider that he was completely obliterated by the end of the previous movie. But, seeing as how this is the ‘Dragon Ball Z’ universe, death rarely seems to be permanent so Cooler is back and he’s bigger and badder than ever. Thankfully though, they don’t really dwell too much on his reappearance and it’s clear that he is just intended as the muscle behind this latest threat to the Earth. Beyond that, the film is really just one giant fight scene that makes for a pleasantly short if somewhat unoriginal outing.

Of course, the main reason that ‘The Return of Cooler’ manages to entertain is the inclusion of some decently put-together fight scenes. Unsurprisingly, the big battle that takes up most of the running time is Goku versus Cooler, and I’d go so far as to say it’s probably one of the best of the movie fights thus far. It features a good amount of regular hand-to-hand combat as well as a number of the over-the-top special moves that we all know and love. It also pushes things up a notch by including Vegeta, and the pair find themselves pushed to their limits as they attempt to find a way to beat this seemingly invincible enemy. Admittedly the climax is a little disappointing but it’s still enough to satisfy, and it helps that we get a few mini battles featuring the other characters inbetween.

While I wasn’t exactly thrilled to see the return of this particular enemy, ‘Dragon Ball Z: The Return of Cooler’ is still a solid ride that is a carried by an abundance of action. If you’re a fan of the franchise looking to see the gang back in action, then this is definitely a decent time filler.