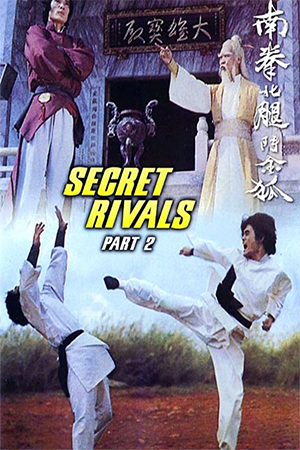 This direct sequel continues almost exactly where the original ended; the death of the dreaded Silver Fox. Mourning over his brother’s demise is Bloody Fox (Hwang again) who vows that he will take revenge against Northern Leg and Southern Fist. However, Bloody Fox’s plans are put off kilter by the news that Southern Fist has been posted over 2000 miles away; he therefore decides that his younger brothers will be an adequate compensation for Silver Fox’s life. Northern Leg will also not be easy to find as he is a wanderer by nature, but Bloody Fox and his trained killers promise to live up to their vow of vengeance. When they find Southern Fists two brothers they succeed in killing the younger, but the older (Tino Wong) is saved in the nick of time by Northern Leg. After escaping, the two once again need to combine to defeat their fearful nemesis; but Bloody Fox has taken precautions, hiring four expert kickers and four expert fistfighters. The scene is once again set for an action-packed finale.

Narrative-wise, this is very similar to its predecessor, using the concept of fists and kicks combining for victory. By the time the sequel had been made, there were already a number of films using this premise including ‘The Hot, the Cool and the Vicious’, ‘Challenge Of Death’ and ‘Death Duel Of Kung Fu’. However, this marks the first significant appearance of Yuen Woo Ping as a fight choreographer and, although not his best work, it shows the promise he would later fulfil. Tino Wong makes an adequate replacement for Wong Tao and remains a sadly ignored star of the Jade screen. The sparks really fly when John Liu and Hwang Jang Lee do battle; the two masters of bootwork are truly a joy to behold. This sequel doesn’t match the original, but there are enough fresh ideas to make it watchable.