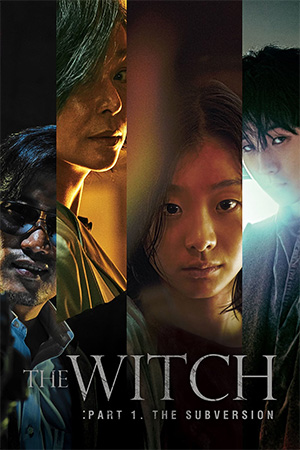 ‘The Witch’ opens with the aftermath of a massacre at a seemingly secret laboratory. Blood is everywhere and security personnel are scouring the nearby woods for a young girl who has escaped. She outruns her pursuers and ends up on a farm of a kindly older couple. Ten years later, said young girl Koo Ja-Yoon (Kim Da-Mi) is living a quiet and loving life with her adopted parents. Seeming like she has forgotten the brutal events of her early life, Koo Ja-Yoon struggles with intense headaches and, at her parents’ request, hides the “magic” she has within: being able to move, levitate and control objects at will. When she is encouraged to go on a national talent show by her over eager friend where she displays said magic, the violent past she once escaped comes crashing back into her life when those she escaped come looking for her, wanting revenge and to harness the power she harbours within.

A confident, tense, and come the final third hard hitting action film ‘The Witch Part 1’ is a smart, emotional, and often thrilling introduction to the world of Koo Ja-yoon and her powers. Mixing drama, sci-fi and blistering action into a heady concoction, writer/director Park Hoon-Jung crafts a unique comic book inspired film. Having written and directed the sublime ‘New World’ (as well as scripting the likes of ‘I Saw the Devil’) he swaps gangsters for young girls in a tale that is as much about Koo Ja-Yoon finding her place in the world as it is super-powered action. The film is a slow burn with the first hour mostly dedicated to us getting to know Koo Ja-Yoon, her dark past and its nefarious inhabitants, who are slowly introduced back into her world. This may make some impatient for the high impact action promised in the trailer but Park Hoon-Jung handles the slow burn with skill, world building with aplomb.

A sort of mix of ‘X-Men’ and say the ‘Bourne Identity’ but with personality all of its own, ‘The Witch Part 1’ is a slick mix of genres that brings human emotion and some wrought tension to proceedings. A blend of classy slow burn filmmaking and bloody violent action, the film may not be to everyone’s taste, but it certainly sets out to find its own rhythm and style. Unfortunately, as with many films that are billed as a first part, the flick can’t quite get away from too much set-up and not enough pay off. It is also hampered by a huge exposition dump two-thirds of the way through that almost stop proceedings in its tracks and of course ends on an either love-it-or-hate-it cliffhanger.

However, this is not enough to derail the film and with a late in the game revelation that turns proceedings on their head and the action blowout of the final third, means ‘The Witch Part 1’ stays on track and delivers the goods.