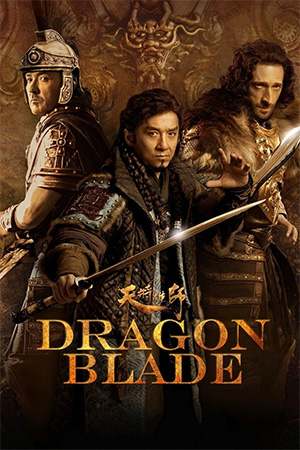 Chan is Huo An, the leader of a group of soldiers who are tasked with keeping peace along the famous Silk Road. Despite being an honourable soldier and fearless fighter, Huo and his troops are framed for an indiscretion along the road and exiled to the remote outpost of Wild Geese Gate. Here they will spend many months restoring the crumbling fortress but it’s not long before work is interrupted and trouble turns up in the guise of fierce Roman General Lucius (Cusack) and his loyal platoon. Despite initially being antagonistic, Lucius soon reveals he is actually on the run from a tyrannical would-be emperor Tiberius (Brody). In his care he has Tiberius’ younger brother who the evil despot desperately wants dead so he can inherit the throne. Thus Huo and Lucius join forces to thwart Tiberius and his ever swarming army in an epic escalation of brutal warfare.

‘Dragon Blade’, for the most part is an entertaining ride but sways inconsistently between hard hitting period action and cheesy dramatics. The core story, that of Roman and Chinese warriors joining forces to combat a marauding maniac, is engaging and there is some enjoyable camaraderie as the soldiers show off their differing fighting skills and it all zips along like an upbeat extended montage. However, Chan’s Huo is such a do-gooder, uniter of everyone and all around ace at everything that it does become cloying after a while and the tone often flips flops between hard hitting action and cheesy drama. The quick fire pace also takes a little while to get used to and means many dramatic scenes and revelations zip past in favour of getting to the next big fight scene.

However, when the action is this good and this much fun one can forgive the shortfalls in drama. Overseen by Chan and his team it’s nothing short of spectacular, expertly constructed and massively thrilling.  Save for recreating wide shots of huge armies and panoramic vistas of a bygone era, the film and its action are mercifully short on CG. The action is mostly done for real, fierce in nature and exhilarating in its execution. Chan is still the man and there are some fine set pieces on display from a fraught escape while under heavy fire from a band of relentless archers to an epic finale featuring at least 5 different armies engaging in battle! Hollywood stars Cusack and Brody also get in on the fighting and despite some doubling (and some awfully clunky dialogue!) they both fair pretty well. Brody makes for a suitably hateful boo-hiss villain.

While some parts may make one cringe (certainly the seemingly never-ending final scenes of mawkish sentiment) others will have one exhilarated by the thrilling action and while it doesn’t always gel, ‘Dragon Blade’ is frequently a slick and fun period action film