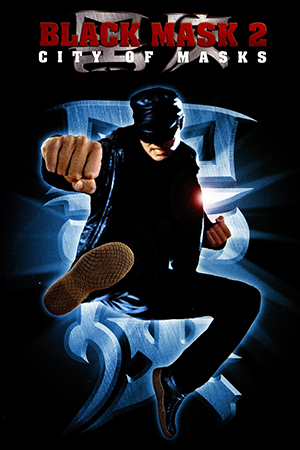 When Tsui Hark announced his intention to create a sequel to ‘Black Mask’, mixed emotions went through the minds of the fans who had witnessed something of a wasted opportunity in the original.  Jet Li playing a Kato style superhero was a mouth watering prospect but sadly it was spoilt by some excruciatingly obvious wirework and the cut ‘n’ shut style of shooting the action.  Perhaps though, a master like Tsui Hark could atone for his sins and create a sequel that exploited the franchise to its true potential.

B City has become one of the most thriving cities for televised wrestling thanks to its larger than life heroes that take on the guises of animals.  However, when one of them goes berserk and physically turns into an Iguana it is up to the masked vigilante known as Black Mask (On) to save the day.   In doing so, he also stumbles across an underground plot to splice human and animal DNA together in an attempt to create the ultimate warrior.  The leader of this little venture, known as Moloch, also sees potential in Black Mask and decides to inject him with Tiger DNA to see what he can produce.  This leaves Black Mask with three pressing dilemmas; stop this operation, remove the animal DNA from his system and try to resolve his original problem of experiencing no pain.  All in a days work for a superhero like Black Mask, or is it?

When you start watching ‘Black Mask 2’ the first question you have to ask yourself is why it’s main star is billed last in the credits?  A few short minutes in and it all becomes clear; ‘Black Mask 2’ is little more than another uneven attempt by a foreign director to appeal to an international audience.  I hate to be so condemning but Hark doesn’t even try to disguise the fact and clearly cares more about his assembled cast of American ex-wrestlers than he does about his leading hero or, god forbid, the plot itself.  The whole package is reminiscent of a Saturday morning kids show (arguably with slightly more violence I’ll admit) and much like these shows, suffers from the same faults.  The acting is relatively poor, although adequate considering the overall quality, and the story could have easily been wrapped up within thirty minutes but these are designed to be fillers in what is supposed to be a visually stunning film.  However, the effects pale in comparison to it’s Hollywood counterparts and the action (as I’ll explain in a moment) is not up to scratch to allow the film to leave a lasting impression.

It used to be that when you saw Yuen Woo Ping’s name listed as action choreographer for a film you could at least be sure of some explosive fight sequences but since his success with ‘The Matrix’ this has not always been the case.  Obviously impressed by Hollywood’s obsession with the lazy computer aided approach, he has felt compelled to move away from his traditional methods of using old school kung fu or semi-realistic wire fu, in preference of over-the-top computer generated  feats.  This sorry fact has never been more apparent than in ‘Black Mask 2’ in which you often wonder whether it was even worth hiring actors at all as the majority of the kung fu is so clearly created by computer.  Of course, the harsh truth about this approach is that no matter how advanced the effects are it never looks as realistic as it would if a stuntman or the actor themselves performed the moves.  As if this alone isn’t bad enough, when you look at the little actual choreography which is utilised here it is of such a poor standard that it just seems like a case of going through the motions and as such is totally uninspiring or exciting.

‘Black Mask 2’ could be seen as Hark’s interpretation of what appeals to a global audience or maybe he just watched one too many episodes of ‘Power Rangers’ before production began. Whatever he had in mind though, it certainly fails to supply the goods.  Is international success really so important that it guides these once masterful directors to create such drivel or have we just seen the last of original Hong Kong inspired cinema?