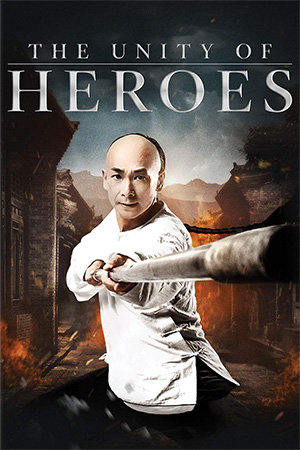 It’s hard to believe that it’s nearly thirty years since Tsui Hark unleashed his revisionist take on popular Chinese hero Wong Fei-Hung on us. ‘Once Upon A Time In China’ was the film that started a genre, led to numerous sequels and imitations of varying quality and made a star of Jet Li, an incredible achievement that continues to be felt today. The world has changed considerably since that time, however, and while in 1991 the Hong Kong film market was buoyant, today it is the Mainland Chinese market that dictates what is a hit or a miss.

The peace of famed martial arts school and home of beloved Fushan resident Wong Fei-Hung (Zhao, returning to the role some twenty three years since his last appearance as the hero) is interrupted by the arrival a sickly stranger whose wild behaviour alarms the doctor. While Wong begins to uncover a link between the demented intruder and experiments being carried out at a nearby Western charitable institution, Northern Fist patron Master Wu arrives in town with his students, determined to stand out in the vicinity. Yet Fushan is very much Wong Fei-Hung’s domain and Wu finds that the populace are not keen on a newcomer trying to teach them a new style. However, the people responsible for the heinous crimes on the locals – the very same medical institute that is inveigling its way into the town – sees this understated rivalry as a perfect way to get rid of Wong Fei-Hung and thereby silence the greatest opponent of their evil work.

Nostalgia is a powerful thing. It can force the rose-tinted spectacles onto our eyes and make us view everything that we enjoyed from our formative years as inherently better than today. Yet there are simple truths, certain films that have not only stood the test of the time but have had their reputation enhanced by the proceeding years. ‘Once Upon A Time In China’ and its sequel were two masterpieces that have only got better with the passing of time though if there was ever a need to reflect on its superiority one only need to look at ‘The Unity of Heroes’. In fact, apart from the slightly embarrassing ‘Once Upon A Time In China & America’, every film of the famed series wipes the floor with this modern re-telling.

The first mistake might have been including the star of ‘Once Upon A Time In China 4 & 5’, Vincent Zhao, in the lead role as it immediately makes one recall better days. ‘The Unity of Heroes’ is a slipshod update of the Wong Fei-Hung myth, a film wholly lacking in not only chemistry but also everything else that made the Tsui Hark chapters so influential. Zhao is still a capable leading man despite getting very little to work with, yet his supporting cast are bland to the point of melting into the background.

‘The Unity of Heroes’ is also awash of the most awkward jingoism since ‘One Arm Boxer’ gave Wang Yu the opportunity to sock it to every nation in Asia bar China. While Tsui Hark’s original and most of the sequels that followed favoured a politically nuanced story, replete with criticisms of the players of the time, ‘The Unity of Heroes’ is often a nauseating polemic. Anyone Western – in fact, anyone non-Chinese – is insidiously inhuman and deceptive. It’s almost like the makers looked at the equally reprehensible representation of Asians in Western films of the past and thought this would be a bit of poetic justice from a country soon to be the most powerful on Earth. Two wrongs, it turns out, do make a right.

For those that can forgive this though, the final nail in the coffin is the fact that the action is massively underwhelming. Li Zhenzhao isn’t sure whether this should be a standard action film or something that elevates Wong Fei-Hung and his enemies into characters that could have fallen out of the Marvel Universe. The confusion makes any tension redundant as the viewer is not quite sure what the limits and parameters of either the heroes or the villains actually are. The one major comfort that can be drawn from ‘The Unity of Heroes’ is that it didn’t borrow the ‘Once Upon A Time In China’ name; that is a fairly woeful recommendation.