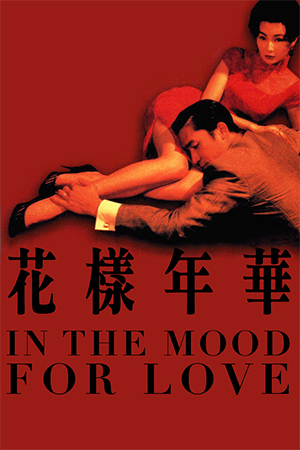 One of the most popular non-action HK movies ever, and one which has quickly attracted a cult following across the globe, is surprisingly, one of Kar Wai’s most average movies.

At times, everything about the film from start to finish is contradictory. An extremely slow moving narrative describing a story taking place over a long period of time and complicated visuals to depict a simple setting. Almost voyeuristic in the way it was filmed, Wong takes pleasure in obstructing the camera’s view, as if we were not supposed to be watching or listening. Couple this with the sumptuous costumes and glowing presence of the two main stars; we are left with a visual treat.

What lets the film down, is the lack of soul so apparent in Kar Wai’s other classics like ‘Chungking Express’, and the feeling of emptiness throughout the slow pace of the feature. At times you feel as though we are missing out on the fast moving lives of Mo Wan (Tony Leung) and Li Zhen (Maggie Cheung) because we spend so much time focussing on small snippets of their life. This is what Wong Kar Wai may have wanted, and it is certainly interesting, but ultimately we are left with a feeling of unfulfillment, as we always want to know more.

A good but not great film, as visually it works beautifully, but the pacing of the direction conflicts with the pace at which the story actually develops. In simple terms, if you enjoyed most of Wong’s other films, you will like this too. However, if patience is not your virtue, then try ‘Ashes of Time’ or ‘Chungking Express’ first, to test the waters of Wong Kar Wai’s bittersweet world.

There are many ways to own this film, the best being the double-disc edition R2 DVD packed with added features. It is unfortunate in many ways that his more superior films have not also received such stellar treatment.