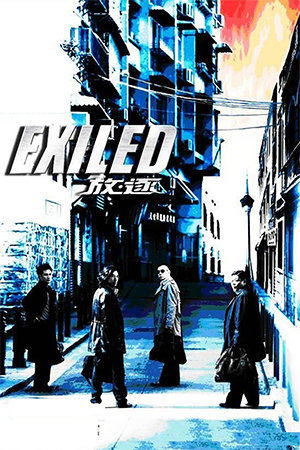 While many might see ‘Exiled’ as Johnnie To hitting all his unique beats to create a sort of greatest hits, the film is still a finely tuned, bullet riddled thriller about friends protecting one another. All To’s trade marks are here: finely dressed gangsters/hitmen, sumptuous widescreen photography and expertly choreographed gunplay sequences. But along with its impeccable style and taut execution, ‘Exiled’ is a riveting portrayal of a group of friends sticking by one another as their once chosen profession threatens to kill them all. The place is Macau and four hitmen (Wong, Ng, Roy Cheung, Suet) meet to take out a former colleague, Wo (Nick Cheung). He’s trying to go straight and live the quiet life with his wife and new baby. The five are childhood friends and the four sent to kill Wo decide to help him out instead of completing the kill. However, their employer, Boss Fay (a flamboyant Simon Yam) doesn’t let employees walk away so easy and soon this lifelong gang of friends are gunning for their lives.

‘Exiled’ joins this group of characters at a turning point in their lives and chosen careers. The five main principles have all reached a crossroads of sorts: as one’s choice in changing his life has altered the whole group’s lives. The themes of loyalty and brotherhood are ever present, as the five desperately play out their final days. As much is said with looks and action as it is with dialogue. ‘Exiled’ is a striped down action film and gangster drama, where style and mounting tension are just as important as the complexities and inevitable fates of those who kill for a living. There is not a scene, glance or camera movement wasted as To intricately crafts a tightly wound plot that bursts with frequent bouts of gun blazing action. The Leone influence can’t be ignored, the sizzling widescreen photography capturing the sun soaked Macau and To lets scenes play out so tension reaches its absolute limit before the eruption of violence.

Any fan of To knows he can craft an action scene. While he seems to always be compared to John Woo (both of them having a thing for gunplay), To style of action is completely different from Woo’s. Yes, both craft scenes of intense gunplay but whereas Woo goes for frenetic and even acrobatic gun action, To plays for tension and the participators using their surroundings. In fact, he is the possible king of the Mexican standoff as the gun fighters often shoot at one another while confined in close quarters. Much like everything in the film, not a bullet is wasted as every single shot counts, whether it’s hitting someone or creating cover for someone else. ‘Exiled’ has several standout action sequences including an incredible gunfight and escape from a makeshift hospital.

All the principles are excellent as you would expect from such a great cast with Josie Ho, as Wo’s concerned wife, and Simon Yam in particular being effective. Yam is the polar opposite to everything else in the film: uncontrolled, over-the-top, slightly unhinged. He brings a welcome streak of black humour to the deadly serious proceedings. While some may find the story a little too simple (it’s not at all) and less patient viewers may find To’s need not to get anywhere fast a little frustrating, ‘Exiled’ is nevertheless a thrilling and beautifully crafted modern day western. Don’t expect a John Woo film or a direct sequel to ‘The Mission’ (one of To’s earlier masterpieces which ‘Exiled’ has been touted as a sequel to) despite the cast and crew of said film being reunited here. Do expect a great slice of Hong Kong gangster action from one of its best directors.