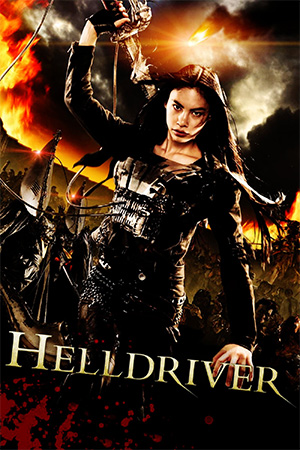 Well what can be said about Yoshihiro Nishimura and the films of Sushi Typhoon that hasn’t already been said? Insane, gory, insanely gory, bloody, mad, wrong, perverted, bonkers, hilarious, out-there, like nothing you’ve ever seen. Much like the director’s own ‘Tokyo Gore Police’ and ‘Vampire Girl Vs Frankenstein Girl’ and other Sushi Typhoon releases such as ‘Alien Vs Ninja’, ‘Mutant Girls Squad’ and ‘Cold Fish’, not to mention other crazy splatter-fests such as ‘Machine Girl’ and ‘Robogeisha’, ‘Helldriver’ is all the above: and then some. While this new wave of bad taste splatter excess from some of Japan’s most gifted make up effects artists is perhaps reaching saturation point (and becoming a tad repetitive), ‘Helldriver’ manages, just, to be a gore injected blast of insane fun that doesn’t let up during its almost two hour running time.

Now all the above films are insane and over-the-top gory in their own right and while ‘Helldriver’ and the above aren’t as nihilistically gory as the likes of other Eastern extreme flicks such as ‘Ichi the Killer’ and ‘I Saw the Devil’ (the Sushi Typhoon flicks and the likes of Machine Girl et al are very tongue in cheek), ‘Helldriver’ just might be the most insane, not to mention hilarious, gorefest yet. Ok, if you’ve seen many of these flicks already then it’s not really anything new but Nishimura just cranks everything up to 11 for this outing. Some kind of nasty space asteroid/dust has turned a good chunk of Japan into flesh eating zombies (complete with what appear to be antler horns protruding from their foreheads) and it’s up to recently brought back from death (and rebuilt as a cyborg complete with chainsaw sword: cool) Kika and her band of motley heroes to rid Japan of the pesky and perverted undead. Que almost two hours of insaneness that continually manages to top every gross out scene that has come before.

Injecting proceedings with a manic energy that somehow manages to never falter during the running time (and contributes to a lot of the fun), Nishimura really outdoes himself here in a film that knows no limits. From that aforementioned chainsaw sword to more head severings that you can shake a ton of horror movies at to a title credits sequence that occurs 48 minutes into the film (what the!!??), ‘Helldriver’ pushes insane into the stratosphere. The gore set-pieces (including severed arms wielding chainsaws attacking our heroine!) build and build to an absolute bonkers sequence that features something called the “Zombie bar”, a sword fight featuring a truck (!!!!), a car made from dismembered zombie parts and the most insane and gore soaked car chase you are ever likely to see. It really has to be seen to be believed. The director then tops this by giving us a giant made of zombies, which then transforms into a plane (!!!!!) for an epic showdown that I can’t even begin to describe here.

The gore is laid on thick but aside from an unnecessary scene that sees the abuse and killing of a schoolgirl (which pushes the film a little out of the tongue in cheek category) it is so ridiculous and over-the-top you’ll be laughing as much as you are grossed out. You are either into these kinds of flicks or not but with an infectious energy, a musical score that propels all the lunacy and a complete commitment to going insane, ‘Helldriver’ is, well, as mad as a bag of smashed frogs!