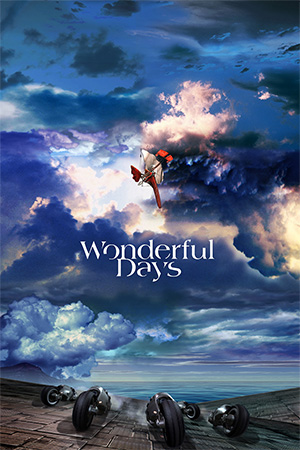 A visually stunning piece of sci-fi Anime, ‘Wonderful Days’ is thrilling to look at but let down by a hollow core and one dimensional characters. Mixing CGI with traditional animation, ‘Wonderful Days’ tells the story of a decimated future Earth where the fortunate live in a hi-tech, protected city, Ecoban. The rest are left to fend for themselves in the wastelands. The wasteland rebels have a plan to harness Ecoban’s energy in order to make the sky blue again, clearing the land of the darkness and fog it permanently finds itself in.

Anime (like any form of cinema) can be a bit hit or miss. Either awe-inspiring animation bursting with intelligence and action (‘Akira’, ‘Spirited Away’) or derivative, nonsensical and often perverted fanboy crap. ‘Wonderful Days’ falls somewhere in between, minus the perviness (shucks). It really is amazing to look at; the city of Ecoban, the vast wastelands and Tron-like motorcycles are all rendered beautifully. The colour tone of blues and greys helps to meld the CGI and 2-D animation into a coherent whole, creating a cold futuristic look. As with many Anime films, the action is spectacular (a parachute dive off the side of a building being the highlight) but is often all too brief and pales in comparison to the like of ‘Ghost In The Shell’ and ‘Appleseed’.

The main problem is none of the characters are particularly engaging. The protagonists are bland and monotone, meaning we never really care about them. The spunkier and funnier supporting characters liven things up a bit but are never on the screen long enough. There are also two small children that are introduced then seem to have bugger all to do with the story. There’s even the obligatory Pokemon style animal (that unfortunately doesn’t get shot). Focusing events on the main character’s love story and need for revenge alienates the viewer from the future world. We never really get the sense of what this world is like or of the people (mentioned briefly and seen at the beginning) our hero is trying to save. ‘War Of The Worlds’ proved you could focus a huge event through the eyes of a small group of people but it only works if we care for them.

Still, ‘Wonderful Days’ is a refreshingly mature animation with just enough action (and even a bit of opera) to pass 90 minutes.