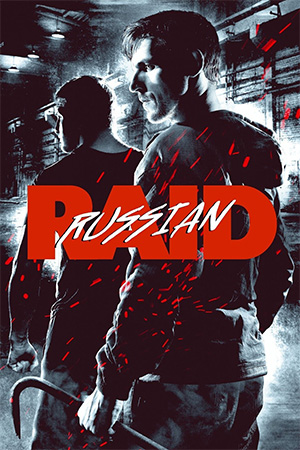 Loosely inspired by Gareth’s Evans ‘The Raid’, ‘Russian Raid’ is a slightly different kettle of fish but does feature oodles of wicked fight action as a soldier and his team attempt to fight their way out of an under-siege factory. Nikita (Kotik) is a former soldier enticed back into one-last-job when he’s hired to lead a team to neutralise a large security force guarding a huge factory, as part of a hostile takeover. However, plans soon change as once Nikita and his team have captured the factory, they discover the facility is owned by a ruthless military warlord who turns up with his own highly skilled team to take it back.

The setup is basically a showcase for star Kotik and various real-life Russian MMA fighters to cut loose in a series of elaborate fight scenes and confrontations. On this basis, ‘Russian Raid’ really works and director Denis Kryuchkov escalates the action and fights scenes in scope and creativity as the danger and number of participants grows: as Nikita and his team first fight their way into the seemingly never-ending factory and then have to fight their way back out. The fighters and their techniques are impressive, utilising the real-life fight skills of the cast to bring a different style to the fight sequences. At first, the fights are very rough and ready, much more ground and pound than intricately choreographed, the fighters often looking like they’re sparring for real. This a refreshing change to over-stylized fight scenes and while there’s some unnecessary editing tricks used on occasion, for the most part the fights are fluid, plentiful and satisfyingly sustained.

While the film is essentially a soldier and his various team members fighting their way out of a compound, there is a little more going on. Nikita and his team don’t really see eye-to-eye leading to tension (and several more fight scenes!) meaning their dynamic is always under question and Nikita himself may also have ulterior motives for entering the factory. There’s a whole host of characters, good and bad, and other than the hero it’s never clear who will and who won’t make it. Director Kryuchkov also adds a few artistic flourishes and while he tries to flesh out Nikita’s background/character it’s unfortunately a little muddled and rushed. In addition, the team he enters the factory with are a quite brash bunch and hard to warm to at first (but show their real character when the stakes become all too real!) and proceedings do tend to be a little scrappy and unfocused at times. Some of the non-fight scenes could have been tightened up and a few characters excised to slicken proceeding up.

However, for director Kryuchkov’s first feature and Kotik’s first leading role (having popped up in the likes of ‘Dragon Blade’, ‘Outcast’ and ‘Chinese Zodiac’ in bit/stunt parts) this is a great first feature. The final third is especially great when the stakes become really high and Kryuchkov stages some incredibly tense tactical gunplay, with Nikita going full-on ruthless soldier. A little rough around the edges and takes a little while to finds its groove, ‘Russian Raid’ is nevertheless a rip-snorting action film with some fantastically staged fight and gunplay sequences with a welcome doing-everything-for-real old school aesthetic. Interesting to see what Kryuchkov and Kotik cook up next, action wise.