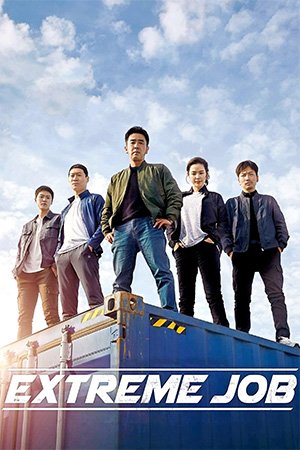 ‘Extreme Job’ surprised many when it was released in 2019, going on to become Korea’s second highest grossing local film of all-time. And it also has something in common with the number one grossing film of all-time, namely star Ryoo Seung-Ryong, an actor who seems to guarantee box-office Won.

Ryoo stars as jaded detective Ko who, along with his oddball team, find themselves underappreciated by the force. A chance at redemption for all involved comes when Ko’s brother, also in the police force but significantly higher up the food chain, gives him a tip on the location of an international drug gang who meet in one particular location. To get evidence, though, they’ll need somewhere to conduct a stakeout and the perfect place appears to be a fried chicken restaurant just across the road. Unfortunately, said restaurant is soon to close and a golden opportunity seems to have disappeared. Yet Ko, at the behest of his team, decides to put money into keeping the restaurant open as a cover while not actually serving food. These plans become complicated when, to continue the stakeout, Ko and his team have to cook fried chicken to keep up the pretence. When one of Ko’s team uses a family recipe that proves an instant hit though, the detectives find that their restaurant now becomes a go-to destination, attracting national press. While the cover continues to be perfect for the operation, their success begins to overshadow the original mission.

Bearing a striking similarity to the 2018 Chinese film ‘Lobster Cop’ (though not inspired by it according to the makers), ‘Extreme Job’ has a fascinating concept that is sure to make you feel hungry while watching it. But you better prepare for a long wait to tuck into your own fried chicken as, once again, ‘Extreme Job’ is a Korean film that stretches needlessly to a two hour running time. I have no problem with longer durations in the story if the writing justifies it; the fact is that so few films today actually do though. What starts as an amusing, quirky action comedy goes off the rails around the hour mark, the makers falling foul of the obscure law of Korean blockbusters that means that they MUST have a duration of two hours or over.

The other major problem with ‘Extreme Job’ is that it struggles massively with tone. It starts out, as mentioned, with a light touch and an interesting story before morphing into a bloated action comedy that doesn’t warrant the attention. The finale is an extended section where people flail their arms at each other in that way that anyone familiar with Korean action cinema will know. This goes on for about twenty minutes longer than it should. ‘Extreme Job’ is more packed with filler than the loft of a Scandinavian town-house. And that is a real shame as there is much to enjoy here, not least of which is Ryoo Seung-Ryong as the haggard hero of the piece. ‘Extreme Job’ is a prime example of where a good editor is worth their salt.