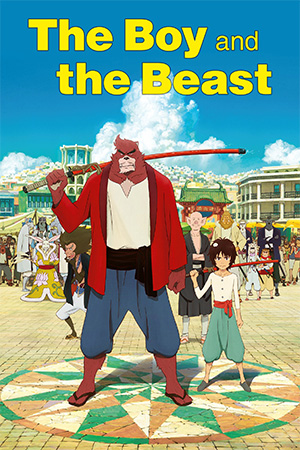 This handsome and heart-warming tale of heroics from ‘Wolf Children’ director Mamoru Hosoda sees orphaned 9 year old Ren stumble into the magical world of Jutengai: a world inhabited by walking talking beasts and gods. Here he is taken under the wing of Kumatetsu, a hulking bear warrior who is looking for an apprentice, all the while having his sights set on becoming the new lord of Jutengai. However, both Ren and Kumatetsu are feisty of spirit, butting heads constantly, leading to a fiery relationship that ultimately brings out the best in them. As the years pass the two, despite their differences, help one another to become better fighters and form a bond as strong as any father and son: though their competitiveness and ability to anger one another never weakens. But as Ren attempts to navigate his teenage life both within the human and beast worlds and the danger of a much darker force threatens to derail both realms, Ren and Kumatetsu must find a way to put their personal wants and differences aside to save both humans and beasts.

Stunning 2D animation (which a little CGI enhancement here and there) helps to create a captivating world of talking animal warriors, but it’s ultimately the core relationship of the main characters that gives ‘The Boy and the Beast’ its heart. While both Ren and Kumatetsu are frosty by nature and may be a little hard to warm to at first, as their journey and relationship progresses they become the emotional core in a story that takes in everything from the nature of identity, the need to belong and  finding one’s self through the help of others. Hosada deftly balances the fantastical elements with the more grounded elements, delivering a tale that both offers spectacle and strongly drawn characters. The film only slips slightly in its grip come the second half when Ren returns to the real world to negotiate college, first love and finding his place in a world he no longer knows. While it’s a necessity to progress the character arcs, some of the wonder falters as the film arguably works better when set in the world of Jutengai.

Likewise, a late act reveal of darker powers, while bringing the film to a satisfying and rousing climax,  jars somewhat  as it come a little out of leftfield. However, these flaws do not derail the story or sense of adventure. Through the strongly realised characters, the emotional bond of the core protagonists and some thrillingly staged action, ‘The Boy and the Beast’ is a pleasing concoction of style and substance. A unique coming of age tale and a wonderfully creative and fully realised fantasy world combine to deliver a rewarding and touching anime.