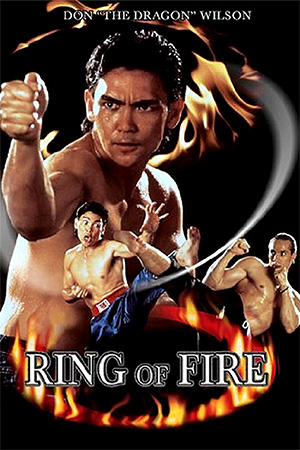 Johnny Woo (Wilson) is a talented surgeon who is strictly focused on his career. His cousin Terry (Vincent Leigh) on the other hand, is a reckless gang member who enjoys participating in underground fighting competitions. When one of his fights gets out of control, Terry finds his duel with two fellow competitors, Brad (Jacoby) and Chuck (Murdocco) spilling out onto the streets of Los Angeles. Johnny does his best to try and keep the peace, but when he meets Chuck’s girlfriend Julie (Ford) he finds himself instantly smitten. Now their battles are becoming personal and each man will find themselves entering the “ring of fire” to fight for the cause they believe in.

Despite the somewhat gritty (and Johnny Cash-esque) sounding title, ‘Ring of Fire’ is actually a loose reworking of Shakespeare’s classic tragedy ‘Romeo and Juliet’. This means that the film is made up of all the now infamous plot points, such as feuding factions, forbidden love, and a slightly unhappy ending. Of course, this is also a B-movie in every sense of the term so I wouldn’t go in expecting anything close to a solid reinterpretation. Instead, what the film actually delivers is a fairly painful romance mixed with some tedious confrontations with several ridiculously over-the-top villains. Despite some of these aforementioned performances being good for a laugh, most of the film is actually pretty poorly constructed and it quickly starts to outstay its welcome.

As for the action on offer, ‘Ring Of Fire’ only really has a couple of minor scuffles that lead up to the “big” finale. Strangely most of these occur without Wilson as his character refuses to fight for the majority of the film. This means that all of the action comes from the likes of Steven Vincent Leigh, Dale Jacoby and Gary Daniels, each of whom are clearly capable fighters. Sadly though, their skills are rarely used to good effect and we only get to see a couple of decent kicks along the way. When Wilson does eventually get in on the action, which is really just for the ending, it has to be said that it’s all a little underwhelming. His bout with Jacoby definitely has some bite behind it but the pacing is very slow and it all comes across as a little too comical for my liking.

‘Ring of Fire’ is a bold attempt at breaking the usual martial arts B-movie mould but unfortunately it proves to be an unsuccessful one. The all-important romance simply isn’t strong enough to carry the film and there is nowhere near enough action to satisfy fight fans.