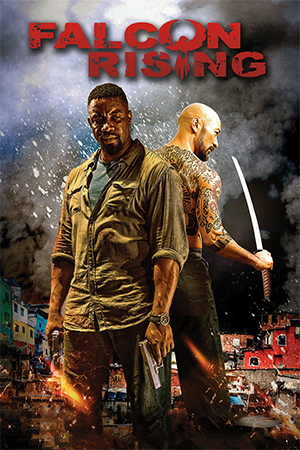 John ‘Falcon’ Chapman is a former marine who finds himself haunted by the bloodshed that he witnessed during combat. He would have all but given up on the world if it weren’t for his sister Cindy who remains his one reason for living. When Cindy is badly beaten and left for dead during a trip to Brazil, John hops aboard a plane to see if he track down the people responsible. With a little help from an old army buddy, he works his way into the criminal underworld and soon uncovers a trail that leads him directly to the Japanese Mafia.

On paper, ‘Falcon Rising’ must have seemed like the ideal action movie. I mean, who doesn’t want to see a tough ex-marine dishing out his own brand of justice on a plethora of pimps, drug dealers and yakuza? Sadly though, the finished product is nowhere near as exciting as the premise may sound. The fairly promising revenge scenario quickly seems to evaporate, and instead we are left to trudge through a blatantly underdeveloped and uninteresting murder-mystery. By about the halfway mark though, it’s clear that even this plot is running out of steam so the writer throws in a couple of laughably bad plot twists before allowing the film to limp towards its all-action conclusion. Solid performances from Michael Jai White and the criminally underused Neal McDonough do provide a few rare bright spots, but even they can do little to prevent the film from being utterly forgettable.

Unsurprisingly, it is the action in ‘Falcon Rising’ that provides the main flashes of real entertainment. Although they take far too long to materialise and are sporadic to say the least, the fight scenes are generally pretty well handled. Jai White is a martial artist who has always impressed and his performance here is no exception. He offers up a nice mix of strength and athleticism, allowing him to participate in a couple of very well-handled set pieces, such as the intriguing three-on-one finale. Sadly, the overall presentation is somewhat spoiled by the typical “invincible hero” syndrome, à la Steven Seagal, but the action definitely remains the one true highlight of the movie.

‘Falcon Rising’ is a disappointingly average slice of action fodder that does little to warrant a solid recommendation. Admittedly, Michael Jai White is decent and there are a couple of promising fight scenes, but they’re really not enough to justify the time investment.