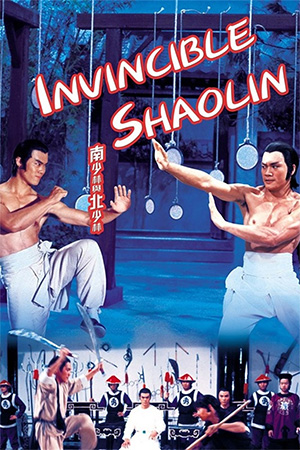 With the sad death of Chang Cheh in recent weeks, it’s a good time to focus on one of his greatest achievements. Not only is the sublime ‘Invincible Shaolin’ one of the director’s best films and among the cream of the Venoms era, but it also stands out as one of the greatest kung fu films ever. A solid plot, deft characterisation and a powerful sense of brotherhood put this head and shoulders above most of the genre.

Shaolin remains a constant thorn in the side of the Manchus and their dominance is threatened by this possible enemy. One Ching warlord (Wang Lung-Wei) devises a fiendish plan to get rid of the threat of Shaolin forever. He organises a battle between fighters from North Shaolin and South Shaolin, but he stacks the odds against one side, resulting in a tragic death. His scheme works very well and the perceived aggression is countered by South Shaolin who organise their three top fighters to train under different masters and exact justice. When the training is complete and the avenging force is ready, they travel up to the Manchu palace to take on the wronged North Shaolin men. After a furious battle the plot is finally exposed and the separate forces combine to take on the Manchu powers. However, there is tragedy for all concerned.

‘Invincible Shaolin’ looks, on paper, to be a tightly plotted, but not exactly incredible kung fu flick. What makes this such a significant classic though is Chang Cheh’s handling of the material; if there were ever doubts as to Cheh’s credibility as a serious director, ‘Invincible Shaolin’ will dispel them for good. Chang Cheh weaves intrigue into the plot along with a clear sense of humanity and even humour. Each character is well-defined by the style they use and each stands out as an individual within the framework. Rarely have the Venoms been given such a chance to show off the full range of their underrated thespian skills; the tragic, the humorous and even the romantic are all displayed in this extraordinary epic. It’s also a unique opportunity for every one of the team to shine in the action scenes and the drama, with the usually villainous Lu Feng finally playing a more heroic role.

Vitally, ‘Invincible Shaolin’ takes all of the aforementioned qualities and combines them with exceptional choreography. True movie buffs will appreciate the former, but kung fu fans will certainly be impressed by the latter. A number of different styles are highlighted and each Venom impresses in equal measure. The sometimes underused Sun Chien makes the most of his more substantial role while Chiang Sheng, Lo Meng, Lu Feng and of course Kuo Chui are equally assured. ‘Invincible Shaolin’ is another Shaw Brothers masterpiece and will stand as an timeless reminder of Chang Cheh’s excellence.