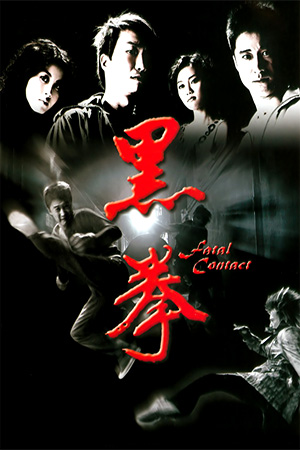 Wu Jing has been working in Hong Kong cinema for over ten years now, but despite a number of leading roles he is yet to find that one project that will catapult him into the big time.  That could all be about to change however, as his eye catching duel with Donnie Yen in ‘SPL’ earned him some serious recognition as well as the leading role in the martial arts extravaganza ‘Fatal Contact’.  Could this finally be the elusive hit that Wu Jing has been desperately searching for?

Kong (Jing) is a national martial arts champion who is taking a break from competitions to tour with a Chinese Opera troupe in Hong Kong.  Whilst there, he is approached by a small-time crook who is looking for new and talented fighters to enter his underground all-contact boxing arena.  Although it goes against all of Kong’s principals, he is eventually persuaded to join so that he can raise some much-needed cash for both himself and the girl he is interested in.  With Kong on board, this small operation starts to grow as he wins fight after fight in spectacular style, making the cash come rolling in for all concerned.  However, it isn’t long before a rival gang boss appears on the scene wanting a slice of the action and this means new and meaner opponents for Kong to fight.  With this supposed sideline spiralling out of control, Kong begins to wonder if he is doing the right thing and if it’s time to get out before he winds up dead.

When the trailer for ‘Fatal Contact’ first materialised, the film just seemed to ooze promise as it showcased a number of enticing looking action sequences set against the intriguing backdrop of an underground fighting arena.  Sadly though, rather than being the holy grail of Wu Jing movies, ‘Fatal Contact’ boils down to nothing more than a handful of average fight scenes strung together by a poor excuse for a love story.  Clocking in at a bloated hour and 40 minutes, the film makes no valid attempts at establishing a solid motif for Jing’s fighting before proceeding to fill in the gaps with an awkward romantic sub-plot.  This lightweight approach is further hampered by the fact that Jing and co-star Miki Yeung show no real signs of chemistry and Yeung’s character is such an annoying busybody that one wonders how any man could possibly fall for her.  In fact, the movie’s only real saving grace comes from the pairing of Jing and Ronald Cheng who share some of the film’s brighter moments. However, Cheng goes strangely AWOL for the film’s closing act so even this quickly fizzles out. As a final nail in the coffin, ‘Fatal Contact’ then makes the calamitous mistake of choosing not to end the film with a final bout of combat. Instead, we get a pathetic attempt to tug at the heart strings accompanied by an extremely predictable plot twist. By this stage though, we all know and care so little about the leads that no one really gives a squat when Law finally attempts to inject some emotion into the piece and provide a moral to this utterly pointless story.

For the film’s crucial action sequences, ‘Fatal Contact’ serves up another huge slice of mediocrity as Nicky Li puts together some very lazy and lacklustre choreography.  The majority of the duels consist of nothing more than a few specific punches and kicks, demonstrated over and over again before Jing finally despatches of his opponent with one last flashy wire-assisted kick.  Don’t get me wrong, you could do a lot worse as the camera angles are decent and the editing isn’t just quick cuts but when you have a talent like Wu Jing on board it just seems inexcusable that the fights are so utterly uninspiring.  As mentioned previously, the lack of any kind of final duel means that the audiences last taste of action is a clear 20 minutes before the finale, making the fights feel like little more than a footnote to this disappointing movie.

‘Fatal Contact’ is just so frustratingly average that it is unlikely to satisfy the majority of viewers.  Like most martial arts movies to emerge out of Hong Kong in recent years, there are flashes of the talent involved but it’s not nearly as entertaining as it should have been.