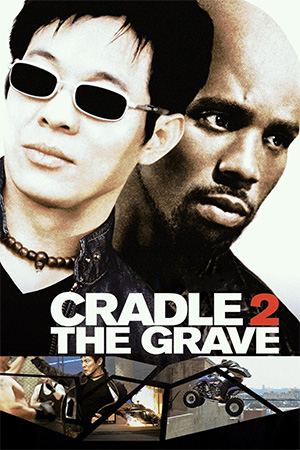 Let’s get straight to the point; in my opinion, this is Jet Li’s worst film since his move to the American market in the late 90’s. Fortunately for Jet, some of his earlier works (such as ‘The Master’) are even worse, but that is no excuse to make a film so blatantly against his personal philosophy, and for it to be so poor.

In reality, Jet Li’s performance in the film is not the worst. However, he seems to take the silent, moody type too far and not inject any personality into it whatsoever. Not being helped by a diabolic script and mediocre actors alongside him, Jet is left with little to do but throw a few punches and look hard as nails. Which he does!

The plot centres solely on DMX’s character as a “moral” jewel thief whose daughter is kidnapped when he steals from the wrong people. Amongst the stash he obtains from his last job is a bag of ‘black diamonds’, which are actually the catalyst for a super-nuclear weapon. His daughter is kidnapped to make him return them, and with the help of Jet who wants to take the stones back to Taiwan, they set about rescuing the most annoying little girl in cinema history.

As with the almost identical ‘Exit Wounds’, the whole film focuses on DMX and his “good criminal” persona (is there a message here?). Much shooting, fighting and face pulling ensues, with Jet given nothing to do but provide the HK fight action. That would not be a bad thing, except the fights are not particularly well choreographed, and atrociously filmed. The editing is enough to cause seasickness and confusion, while Jet’s opponents are nothing but meathead wrestlers and a criminally underused Mark Dacascos.

The only redeeming features of the film itself are the comedy relief moments provided by Anthony Anderson and Tom Arnold; who as always, raise a smile. Unfortunately, the rest of the film, and DMX in particular, are bad. His arrogant swagger, hypocritical moral overtones and awkward fight scenes should have condemned this to video hell. As it stands, Jet Li’s US career looks to be limited and will ultimately be short-lived if he doesn’t start working with a greater variety of filmmakers. Luc Besson and Joel Silver are clearly not the best thing for him, and with all that money now in the bank he can afford to be more demanding.

In short, this is like an extended episode of Martial Law with an R rating. If only Sammo was on hand to film the fights himself. If you loved ‘Exit Wounds’ and ‘Romeo Must Die’, then this is for you. But then again, if you loved those films, then you must have missed out on some true action classics and I recommend you browse the review section before renting another movie.