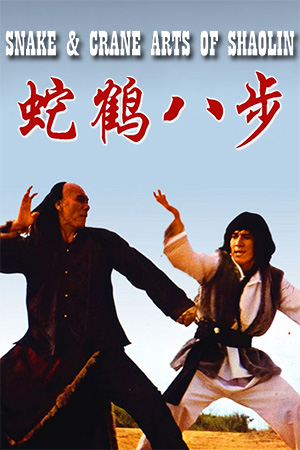 It’s often the case in Hong Kong cinema and indeed throughout the globe that some films notch up box-office receipts that are hardly in keeping with their overall quality. This operates in both ways: some ineptly made productions manage to become major money earners whereas some entertaining films have been considered financial failures. Jackie Chan’s ‘Snake And Crane Arts Of Shaolin’ is firmly in the latter category.

A meeting of China’s top martial artists takes place in a secret location in a bid to consolidate the various styles into one definitive technique. By the end of their conference, the masters have created the Snake and Crane combination that could well be the finest style in the martial world. When the moves are written down in a manual and the masters all suddenly disappear, all of China’s many clans become embroiled in the intrigue. Enter a young fighter, Hsu Ying Fong (Chan), who claims to be in possession of the manual and refuses to tell anyone what had happened on that fateful day. All of the various clans take an interest in Hsu and all try to either bribe him or beat him in order to gain the manual. Hsu is a supreme fighter though and he therefore continues his mysterious objective without letting the valuable instruction book out of his sight. After gaining a few uneasy allies and countless other enemies, Hsu draws ever closer to his unusual goal. On finally finding the man with the shoulder scare that he has long hunted, Hsu is finally ready to reveal the truth about what happened to the various masters and how he came to have the highly-prized Snake and Crane book.

‘Snake And Crane Arts Of Shaolin’ starts with a stunning martial arts display by Jackie Chan and ends with one of the most complicated pieces of choreography ever seen on screen. In between these two majestic book-ends, the film boasts plenty of other reasons to keep watching. Chen Chi-Hwa again fills the storyline with a whole host of eccentric yet watchable characters that mean there is rarely anything approaching a dull moment. The cast are full of Lo Wei regulars with Nora Miao in particular standing out as the very serious leader one of the clans. The obvious star of the proceedings is of course Jackie Chan and he once again does not disappoint. Those used to his very modern fighting methods and incredible stuntwork will still be impressed by his sublime traditional skills; in the opening ten minutes, Chan dazzles the viewer with a tonfa/sword display that is clear evidence of his superior talent. Then the climatic fight pitting Chan against three deadly spear fighters, then the film’s main villain will undoubtedly rank as a very strong reason for viewing. Although lacking the polish of his later traditional kung-fu films, this remains a constantly engrossing piece of entertainment. Definitely required viewing for all fans of 70’s kung-fu cinema.