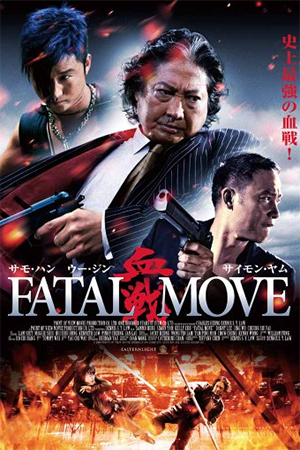 Hong Kong Category III action returns full force in the slick and suspenseful ‘Fatal Move’, a flick that sees some of the country’s biggest stars on screen together. Cat III action is Hong Kong film’s rating for extreme violence, gore and sexuality. No holds barred cinema that is not afraid to show the nastier side of life. ‘Fatal Move’ may not have much sex on display but it certainly has a good share of unsettling violence and graphic gore in its portrayal of a mob family losing grip on their power and resorting to ever violent ways to regain it.

Sammo Hung is Lung the head, or big brother, of a powerful mob syndicate in Hong Kong. Along with his wife Soso (Chu) and troubled brother, Tung (Yam) he has ruled with an iron fist for years. But with the police closing in and a possible rat amongst his ranks, Lung’s empire slowly begins to crumble and his trust of those closest to him dwindles. Violence escalates as the gang clashes with other gangs and the police become a force to be reckoned with all leading to the ultra violent and melodramatic ending. The plot of Fatal Move is perhaps the weakest point. Not that it is too thin, more the opposite, in too much is going on. Lots of double crosses, assassins turning up and disappearing almost as quickly, corrupt police officers, brotherly love and a pace that doesn’t do justice to all these elements. In several cases the drama comes off as stale, never really igniting, causing the viewer’s mind to wander. Too many characters and famous faces pop up without really doing anything also adding to the confusion. What exactly was the point of Lam Suet’s character? Then Madame Soso (a stunning Kelly Chu) who has been quietly in control most of the movie all of sudden starts shooting a bunch of characters who have come from nowhere and rubbing their blood all over here face. A complete 180 indeed. It’s as if writer and director Dennis Law is trying to throw in everything he can think of in an attempt to make a gangster epic.

What the film gets wrong in pacing and storytelling it makes up with superb acting, riveting action and a heavy does of ultra violence. Hung, Yam and Chu all shine on the screen and Yam still proves he is the coolest dude out there despite playing a nasty character and wearing a bright white suit and pink tie. Hung is also good, pretty much playing the same role he did in ‘SPL’, obviously enjoying playing bad guys for a change. But it is Chu as Lady Boss Soso who is dynamite, a beautiful looking woman who you wouldn’t cross if your life depended on it. Unfortunately stars like Wu Jing and Danny Lee don’t fair so well. Those expecting another star making turn from Jing may be disappointed as his part is nothing more than a glorified cameo. He’s still good, especially in the action, but it’s a small part and the same one he played in ‘SPL’. Lee is barely there at all and as one of the stars of ‘The Killer’, you would expect him to be put to more use.

The action on the other hand is always riveting, evenly spaced and based more around gunplay than martial arts duels. Though there are a few of those too. A contract hit featuring an assassin very closely resembling someone from ‘SPL’ (‘Fatal Move’ just seems to name check this movie a lot, even reuniting the main cast), a raid on a police station and the Hung Vs Jing fight are all well crafted sequences. But it’s the level of gore and blood that sets ‘Fatal Move’ apart from other action movies. Limbs are severed, chopped off and ripped apart with aplomb, and frequently, and while the filmmakers opted for the CGI route with the blood and carnage it never detracts from the brutality of the violence. People are gunned down mercilessly, a woman is tortured graphically, and a man is stabbed in the neck repeatedly making for uncomfortable viewing and earning the film is Cat III rating. Not for the weak stomached.

‘Fatal Move’ is most certainly flawed and could have been a lot tighter and less meandering. Yet it still manages to be an entertaining slice of gangster action that entertains if never really ignites. Slick production values, a great cast and some corking action make it worth a view. Just don’t go expecting ‘SPL’ (there’s that film again) just because Hung, Yam and Wu Jing are reunited.