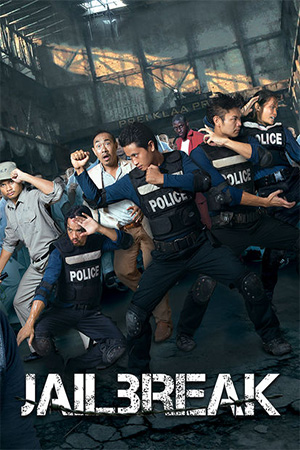 Parisian super cop Jean-Paul (Ly) is on assignment in Cambodia teamed with a squad of local cops whose mission is to escort renowned crime boss Playboy (Savin Phillip) to a maximum security prison. Playboy is adamant that is he not the true boss and in return for his safety agrees to identify the real boss of the infamous Butterfly gang. Getting wind of his turncoat antics, Madame Butterfly (Tran) orchestrates for the prisoners to run riot and kill Playboy before he can give evidence. Jean-Paul and his plucky squad thus find themselves trapped within the prison fighting to stay alive and get Playboy out in one piece.

Simple of concept and low on budget, ‘Jailbreak’ overcomes any b-movie limitations with a commitment to cramming in as much awesome martial arts action as it can in its 90 minute run time. Billed as Cambodia’s first big action blockbuster, it certainly lives up to that label as ace stunt man and actor Jean-Paul Ly (‘Lucy’, ‘Now You See Me 2’) unleashes a surfeit of wickedly choreographed action. After a good twenty odd minutes of set up, it’s then fight action a-go-go as the crew of cops make their way through the prison battling gang after gang of criminal scum. Fast, fluid and full of fury, the fights scenes are well choreographed and sustained for maximum impact. Considering the cramped environment, the filmmakers find creative ways to up the action and keep it fresh as Jean-Paul and his squad encounter limitless numbers of deadly cons. Kudos to director Henderson for keeping the camera wide and letting it flow so one can always see what is going on, not least in the first epic brawl that kicks proceedings off.

This is as much a launching pad for Jean-Paul Ly as anything, as he gets to display his considerable talents. An impressive high-kicker he cuts loose in a series of brutal fight scenes, often taking on many opponents at one time, showcasing his considerable skill and striking boot-work. However, it isn’t a one man show as he is ably supported in the fight department by the likes of Dara Our, Laurent Plancel and the wonderful Tharoth Sam. She all but steals the show as the lone female member of the police squad and her one-on-one fight with Celine Tran is the highlight of the film.

‘Jailbreak’ is certainly rough around the edges, its budget straining on occasion with the lack of varied sets meaning proceedings do become a little repetitive. In addition, for such a violent film (though it doesn’t reach the same excesses as say ‘The Raid’ films) there is perhaps some ill-timed comic relief that’s doesn’t really sit well with all of the brutal action. Crime boss Playboy is pretty much played for laughs which undermines some of the tension but Savin Phillip certainly gives an energetic performance.

It may not be the most original fight flick around but ‘Jailbreak’ obliterates any flaws through its dedication to sating the most ardent fight fan’s want for excessive action. A fine B-movie with superb martial arts action ‘Jailbreak’ is, for the lack of a better phrase, entertaining as hell.