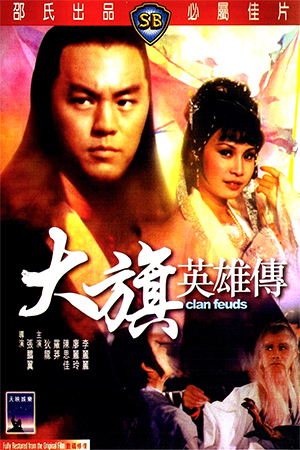 For those who thought adaptations of Gu Long novels starring Ti Lung were the sole preserve of Chor Yuen, ‘Clan Feuds’ offers a different director’s interpretation of familiar material. Chang Peng-Yi is given a typically Byzantine story to mould for the big screen and his efforts prove to be surprisingly cohesive.

While two clans continue their long-held rivalry, two of their respective members fall in love, facing the vitriol of their separate chiefs. Tze Chung Tang (Ti Lung) is asked to execute the disobedient lover who belongs to their clan, but saves his life and sends him into hiding. The grief-ridden brother, Xun Zheng (Lo Meng), vows revenge on Tze, though both men subsequently find themselves embroiled in the search for a valuable kung-fu manual. Every clan appears to be involved in the hunt and a variety of tricks are used by each one as a means of getting the upper hand. One particularly ambitious swordsman uses his ravishing accomplish to ingratiate her way into Xun Zheng’s affections in the hope that he knows where the manual is, while further driving a wedge between him and Tze.

Though ‘Clan Feuds’ is another swordplay film where even the most unyeilding of attention will be tested by numerous sub-plots and characters, it consistently entertains over its 90 minute running time. Anyone confronted with a cinematic adaptation of Gu Long’s work will instantly know whether the entangled storylines and endless twists will suit their viewing tastes. Importantly though, Chang Peng-Yi creates enough genuine intrigue to ease viewers through the usual convolutions, a skill that Chor Yuen showed in his best works.

Director Chang Peng-Yi bathes the production in a visual splendour that even trumps the extravaganzas of Chor Yuen. Use of attractive outdoor locales and some of the most expansive and intricate indoor sets seen in any Shaw Brothers’ film makes ‘Clan Feuds’ a joy for the eyes. The action may be uninspiring – especially considering it was made in the creative swansong of the early 80s – yet the compensation is in the way the film is shot. One particular moment see Ti Lung fighting a group of female warriors who are each shot in a different coloured light, giving an ordinary scene a significant impact. Though that eye for detail my be scant reward for those seeking fast-paced, exceptionally choreographed action, it does add another layer of interest for the casual viewer.

‘Clan Feuds’ doesn’t quite utilise the significant talents of its excellent cast, with Lo Meng particularly underused in the action scenes. Nevertheless, it is another chance to see that consummate genre star, Ti Lung, glide through every scene with a debonair charm that is hard to equal. Along with solid direction and an effective use of grandeur, ‘Clan Feuds’ is an enjoyable distraction.