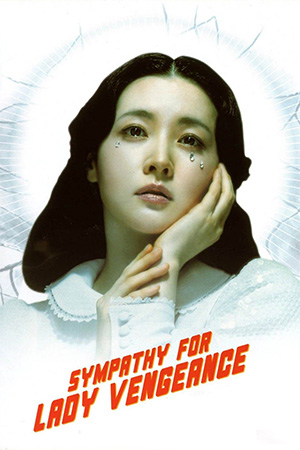 Come in Tarantino, your time is up.  ‘Sympathy for Lady Vengeance’ surpasses both ‘Kill Bill’ movies and is a powerful conclusion to Park Chan-Wook’s Vengeance Trilogy.

Released from prison after thirteen years for a shocking child murder, Geum-Ja (Lee) plots revenge on the man who put her there.  That this man is Choi Min-Sik, Oldboy himself, should be proof that ‘Sympathy for Lady Vengeance’ (released in the UK as ‘Lady Vengeance’) matches the first two instalments blow for blow.

Together with the female inmates Geum-Ja helped and manipulated in prison, her plan of revenge begins to take shape when she is released.  Matters complicate when Geum-Ja’s daughter, living with adopted Australian parents, insists on returning to Korea.  And Choi Min-Sik’s abominable Mr Baek harbours a secret far greater than being responsible for the botched kidnapping Geum-Ja did time for.

The restrained visual style of ‘JSA’ and ‘Sympathy for Mr Vengeance’ has now been replaced with the directorial pyrotechnics of ‘Oldboy’; digital effects, a rich white and red colour scheme and the most fluid camerawork since David Fincher’s, this is a feast for the eyes.  However, there is more than CGI-candy: ‘Sympathy for Lady Vengeance’ is loaded with religious imagery, but Geum-Ja’s dark wardrobe and a subtle use of hellish crimsons suggests she is not solely on the side of the angels.

Park’s storytelling audacity outdoes his other Vengeance movies: using an intricate flashback structure the first hour recalls Geum-Ja’s prison time and the formation of her plan, which isn’t revealed until near the halfway point, and then only to a minor character.  The playful, kinetic style of the first hour alters midway to a far darker, more upsetting second hour when Geum-Ja carries out her plan to kidnap Mr Baek and discovers the situation is more extreme than she imagined.

Park risks losing his audience with this abrupt shift, but those willing to stay the course can expect a thrilling, rocky journey.  Although containing less onscreen violence than ‘Sympathy For Mr. Vengeance’ or ‘Oldboy’, here it is far ghastlier.  Accusations of bad taste will be fired from some quarters, but Park is not afraid to morally assault his audience.

Lee’s hungry performance as Geum-Ja is far removed from the nice-girl roles that made her famous in Korea, but as the beautiful avenging angel (and devil) she gives a career best.  Choi Min-Sik belies his sympathetic performance in ‘Oldboy’ or ‘Crying Fist’ with a portrayal of pure evil.

Providing meat for the mind as well as fireworks for the senses ‘Sympathy for Lady Vengeance’ is one of the best films of 2006.  Park’s next film, the tentatively titled I’m a Cyborg, But That’s Okay will prove whether he can serve warm dishes as well as cold.