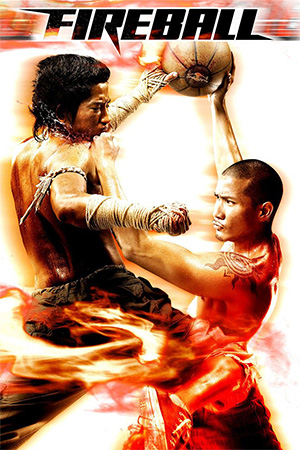 Combining a sports movie with a martial arts movie seems to becoming some sort of a mini trend, with the likes of ‘Shaolin Soccer’, ‘Kung Fu Dunk’ and even ‘Born to Fight’ combining various sporting activities with kung fu action. ‘Fireball’ continues this somewhat odd trend, treading a similar path to ‘Kung Fu Dunk’ by combining basketball with martial arts. Unlike ‘Kung Fu Dunk’, ‘Fireball’ is extremely brutal, gritty and bloody with Muay Thai clashing with basketball for one fierce fight flick.

The game of fireball is a brutal sport where contestants seemingly have to dribble a basketball and get it into the net at the opposite end of the court (much like in basketball) but players are allowed to stop one another by engaging in frequent bouts of hard hitting muay tai fighting. Weapons aren’t frowned upon either meaning knuckle dusters, steel bats and even a basketball hoop are used at some point in order take out an opposing player. Fireball the movie follows sports movie plotting 101 with a group of rag-tag players forming a team to win the fireball championship against seemingly unbeatable odds. Each player has a reason for being there (whether it’s to get back at the gangsters who put his brother in a coma, or raise enough money so his mother and sister aren’t thrown out of their home), the underdog players are all there to prove/avenge/or put something right. There is even the obligatory ultimate badass team to beat come the finale.

Now the whole set-up/premise/plot of ‘Fireball’ is pretty straightforward. This is a martial arts basketball movie and anything but straightforward would be a detriment to what we are all here to see this film for: martial arts basketball. Any complaining about a “lack of plot” is a redundant exercise as the reason most of us will be watching this film is to see some full-on, action packed martial arts basketball. Which, thankfully, ‘Fireball’ has a lot of. The film doesn’t skimp on its premise and the film is chock full of Thai style martial arts, basketball infused action. This is certainly a brutal film. The fights/matches feature broken bones, snapped limbs and lots and lots of blood. It’s quite unflinching in its violence. The gritty and grimy look of the film brings a rougher edge to proceedings and the frequent matches of fireball action are pleasingly sustained and often adrenaline fuelled. On the downside, for everything the makers get right with fluid action and clear shots of performers pulling off remarkable Muay Thai moves, there is just as much of the action hampered by shaky cam and hyper-cut editing. It’s a shame really as the sport is intense and brutal enough without having to resort to this kind of editing nonsense and if they had just eased up on all the tight camerawork and editing the action in ‘Fireball’ could have rivalled that seen in the likes of ‘Ong Bak’.

Still, for the most part ‘Fireball’ delivers on its concept. Sure everything in-between the violent clashes on the court is a little amateur (though the cast certainly do their best to bring passion and enthusiasm to their characters) but the point of the film is to showcase an original, if unlikely, martial arts sport and on those terms ‘Fireball’ delivers.