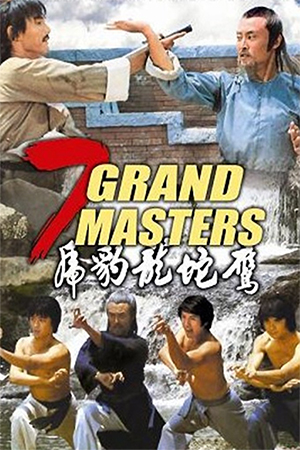 On the day of his retirement from the martial world, kung fu master Sang (Jack Long) is surrounded by well-wishers and adoring members of the local community who are in no doubt about his mastery. The moment is interrupted by a note that claims that he cannot be the true grandmaster of China until he has defeated every possible opponent of every conceivable style. It is this statement that inspires Sang to take up this challenge and, with his closest students and daughter in tow, he travels across China defeating all the kung fu masters he faces. During this epic task, Sang is followed by Liu Ying (Li Yi Min), a young man hoping to be accepted as a student by the legendary master. Liu’s best efforts are ignored and he finds himself an object of ridicule to the other pupils of Sang, though the desperate youngster continues to endure all of this in the hope of receiving a favourable decision. Eventually master Sang changes his mind, accepts Liu as his new student and is quickly impressed at how quickly the newcomer learns kung fu. As time passes, Liu becomes the most proficient of all of Sang’s students and the master himself succeeds in beating every other top fighter in China. The quest to finally name himself grandmaster of China is complete and the band travel home after years away. However, master Sang is shocked to find that one surprise challenger is still left and their reason for the fight goes far beyond gaining a mere title.

‘The Seven Grandmasters’ is widely considered to be Joseph Kuo’s greatest achievement, an independent kung fu film that has garnered praise for it’s out-and-out action and overall energy. Kuo has made some of the most significant films of the independent field and so this acclaim is worth taking notice of. For the most part, ‘The Seven Grandmasters’ delivers the thrills and spills expected of a better Kuo production while also offering a few qualities that earn it its extra praise. Joseph Kuo is a master of working on a tight budget and with this film he shows how it can be done without being too obvious; he uses modest sets and, to the credit of the production’s overall look, ample use of outdoor locations. Kuo also makes better use of the usual assortment of characters – even the predictable master, bullying older student and naive newcomer are allowed a few moments of interplay to fleshing out their personalities. Although the film offers nothing revolutionary in this department, it’s fair to say that the attempts to have scenes of repose are to the overall credit of ‘The Seven Grandmasters’.

The main question that most fans of the independent field will ask is undoubtedly regarding the action. Thankfully, with Yuen Kwai and Yuen Cheung Yan as choreographers, this is where the film excels. The choreography mixes together some solid hand-to-hand combat with some acrobatics and a few fine moments of weapon work; altogether, the quality is of a high enough standard to make it stand out from the hundreds of other independents of the time. Although the film has its moments of character development, it is almost non-stop action otherwise and so will certainly please even the more experienced viewer.

It’s a pity that ‘The Seven Grandmasters’ is nearly a classic, but not quite. The reason it falls short and the reason why many of Kuo’s features stumble in the same way is the ending. After hitting the viewer with an interesting twist – something that is a breath of fresh air considering the conventions of the genre – Kuo destroys all of its emotion and power by turning back from it moments later. The sudden revelations and concluding twists ground the film in the kind of turgid generics that it had attempted to move away from. While a Joseph Kuo film is never going to offer the direction or drama of Liu Chia Liang or Chang Cheh’s work, it is nonetheless a big disappointment. ‘The Seven Grandmasters’ is only just worthy of its four stars due to Kuo’s ruination of his own good work.