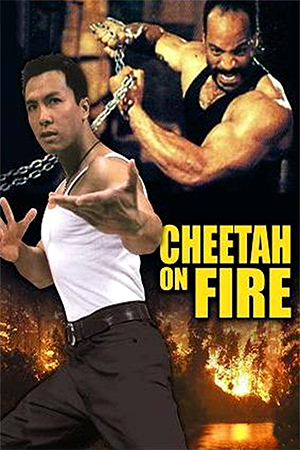 Filmed almost straight after the slightly inferior ‘Crystal Hunt’ and with an almost identical cast (minus Sibelle Hu who must have realised what she was doing!), we are treated to an all action, no plot affair along similar lines to the ‘In The Line Of Duty’ films, but with a lower budget!

The plot, or rather the excuse for scenes between fights, is centred on the search for a group of soldiers; ‘The Gunmen of the Golden Triangle!’ who are in search of a microchip which has no apparent function. The result is what you would expect: Lots of guns, fights and ridiculously over the top bad guys and an all round fun night in!

Unlike ‘Crystal Hunt’, we are treated to better general direction with a few tense moments and more consistently impressive action from start to finish. Donnie clearly learnt a lot from Yuen Woo Ping as the fight choreography is up to the same kind of standards as ‘Tiger Cage’ (the first, not the second!) throughout. Donnie regulars John Salvitti and the especially superb Michael Woods give their usual excellent fighting performances, while Donnie continues to impress as one of the greatest on screen fighters ever. Not many others could put together such excellent hand-to-hand sequences in such little time, it’s just a shame that he hasn’t continued with this style in his more recent films. ‘Cheetah On Fire’ is supremely violent and full of bullets, knives and of course kung fu usually resulting in a bloody death. Not everyone’s cup of tea but typical of this genre of HK films.

As with ‘Crystal Hunt’, this is no ‘Tiger Cage 2’ but is still an excellent set of combat sequences strung together with little reason but to get the adrenaline pumping. As a result this is one of the best 90’s actioners in terms of pure, wire-less hand to hand combat, and as such, should make it’s way into the collection of any such fan!

My only grumble (apart from a non-existent storyline!) is the waste of Mark Houghton, who is killed early on without a chance to show his fighting talents!