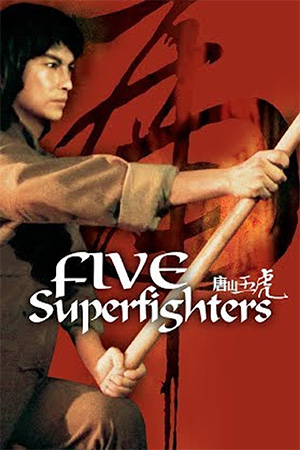 The basic kung-fu plot thread of a student learning new skills from a reluctant and reclusive master is one which has proved popular ever since ‘Snake In The Eagle’s Shadow’ (and before). This later Shaw Brothers film takes this concept to its natural progression: if one master/student has proven such a hit with fans, why not have three? Add to this a depressed and shamed master seeking revenge for his humiliation and ‘Five Superfighters’ is born.

Trouble arrives in town when a cloaked kung-fu expert sets about embarrassing local masters with his exceptional ability. After meeting a humble, unassuming master and his three eager students, the fighter continues his arrogant mission and leaves another few reputations in tatters. The defeated master stumbles away with his pupils, but is left shattered by his complete loss of face. It is this dejected state that persuades his three students to look for revenge against the mysterious wanderer. However, they are well aware of their limitations and decide to split up in the search for worthy masters.

The first avenger meets an eccentric Crane style master who easily beats him during a fight. After some persuasion, the master accepts the newcomer and decides to teach him the precise Crane movements. The second meets a bean curd seller and her blind father. An initial misunderstanding is turned into a teaching opportunity when the second student is taught legwork by the high-kicking woman. Finally, the third is given a chance to learn pole-fighting from a fisherman after a failed attempt to steal his fish. This opening animosity also turns into a fruitful teacher/student relationship. Meanwhile the original shamed master is also preparing his skills and, in between drinking bouts, sharpens up his swordplay skills. With each of the four now galvanised by this period of teaching, they are now ready to meet their tormentor.

First thing’s first: ‘Five Superfighters’ is not among the absolute cream of the Shaw Brothers’ crop. The plot is very basic with each character given very little depth or explanation. In the very best genre films, the villain at least has some motivation or reason for his activities. Here the main antagonist is merely a very unpleasant stranger whose whole purpose is to arouse trouble with those he meets. Thankfully though, this particular kung-fu flick is packed with some impressive fight action. The amount of masters/students on offer here means that the choreography has a wide scope and constantly throws something fresh into a conflict. The cast of young Shaw’s stars are well-equipped to deliver an exciting end product and they do succeed, with varying levels of skill. There is the potential, with a storyline of this nature, for things to get too familiar and uninteresting. Law Ma though keeps things moving along at a consistent pace. The high-point of ‘Five Superfighters’ is the lengthy final confrontation which throws together a number of different styles with aplomb. Scenes like this and the generally undemanding nature of the film make this a definite thumbs up for genre-lovers. It may not be the greatest of its kind, but there’s plenty to recommend it.