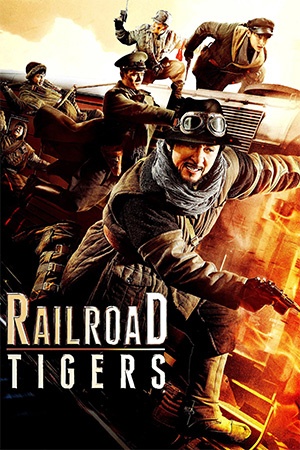 During the Japanese occupation of China, a group of outlaws known as ‘The Railroad Tigers’ make frequent covert attacks on the enemy convoy as it travels between Tianjin and Nanjing. Headed by widowed railway work Ma Yuen (Chan), the rag-tag group include his son, daughter and numerous other colleagues who have turned to minor crime to steal from the invaders to then give to the poor. Although their ingenious raids are more of a hindrance to the Japanese than a major threat, when a Chinese soldier who has escaped from the front line is captured and executed, the Tigers decide to complete his mission for him. Against the odds, the Tigers have to steal munitions from the opposing army and make their way to a heavily fortified bridge to blow it up, thus fulfilling their promise to the fallen comrade.

After the by-the-numbers action comedy ‘Skiptrace’, ‘Railroad Tigers’ can be considered a partial return to form for Jackie Chan. As mentioned in the review for the aforementioned, fans of the film star have to accept that the days of ‘Drunken Master II’ and ‘Project A’ are long since past. That said, Chan still has much to offer and ‘Railroad Tigers’ is a step in the right direction for the legend. As opposed to ‘Skiptrace’s contrivance of a ludicrous romance for the star and more cliches from Chan’s past than can be accepted, ‘Railroad Tigers’ gives him the chance to play a more mature, more wizened character, something that suits him perfectly.

It’s fair to say that ‘Railroad Tigers’ doesn’t necessarily start well though. The endless animated character intro cards seem never-ending and really threaten to derail the film before it gets a head of steam (see what I did there?). It takes a good thirty minutes until the tone settles into its groove and many viewers might already have made their mind up about ‘Railroad Tigers’ before then which is a shame. Another major problem with Ding Sheng’s film rests on the editor’s shoulders – who funnily enough, is Ding Sheng himself – which is severely lacking in discipline. No camera shot goes on for more than a couple of seconds and without an absorbing film this could be a major distraction. The editing is probably meant to make ‘Railroad Tigers’ seem modern and appeal to the ever dwindling attention spans of audiences today, but it ends up doing the film a major disservice.

Despite the missteps, ‘Railroad Tigers’ chugs along very well when the main plot starts up. It’s still a bit ‘Allo ‘Allo meets ‘Runaway Train’ for many, yet it just about finds the right balance between light-heartedness, tension and slight irreverence. The cast help sell the idea very well and Jackie is well supported by his own son and a whole cast of colourful characters.

One thing that greatly impresses with ‘Railroad Tigers’ is the action sequences and the staging of them. Gone are the intricate Chan choreographed fight scenes and in comes some large scale set-pieces that look good enough to put most Hollywood blockbusters to shame. Chinese cinema has a very mixed relationship with computer effects, but ‘Railroad Tigers’ is probably as good as a local film has ever looked. To think that the film cost US$50million – a tidy budget by Chinese standards, but a pittance to Hollywood – is remarkable; the complicated finale featuring gunplay, train crashes and stunt-work is one of most eye-catching endings to a big budget Asian film in recent years.

‘Railroad Tigers’ is an often spectacular and thoroughly enjoyable action comedy with a range of characters that the audience really begins to care about. It’s just unfortunate that Ding Sheng’s needless predilection towards the usual 21st century weakness of style over substance stop this being a minor classic and lose it half a star.