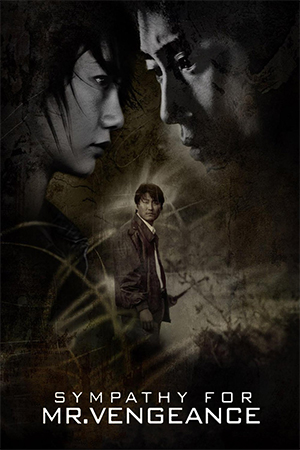 Ryu (Shin Ha-Kyun) is a deaf mute whose sister (Lim Ji-Eun) is in need of a kidney transplant. Ryu steps forth to be the donor only to discover that he has a different blood type rendering his kidney incompatible. Ryu then loses his job. Ryu approaches a group of black market dealers and pays them 1 million won and his own kidney in exchange for a compatible kidney for his sister. He awakens to find his kidney removed and the money gone with no trace of the dealers. Miraculously a donor comes forward but Ryu has now lost all his money. With the aid of his girlfriend Yeong-mi (Bae Du-Na), Ryu proceeds to kidnap the daughter of Dong-Jin (Song Kang-Ho), the rich businessman responsible for his dismissal. After Ryu successfully acquires the ransom he returns only to find his sister has committed suicide. While burying his sister Dong-Jin’s daughter accidentally drowns. When Dong-Jin discovers his dead daughter he vows revenge on her captors.

‘Sympathy for Mr. Vengeance’ could never be described as a film that paints it’s characters in black and white. Director Park Chan-Wook (‘JSA – Joint Security Area’) blurs the boundaries of morality as the two leads (played by the impressive Shin Ha-Kyun and the ever watchable Song Kang-Ho) who in other films would be classed as hero’s, are compelled to commit acts of a violent and grotesque nature. The torture scenes carried out by Dong-Jin are particularly nauseating. But while ‘Sympathy for Mr. Vengeance’ may have acquired a reputation of being excessively violent, the amount contained within the film remains relatively minimal. Though the violence that remains is to say the least unflinching.

The cinematography is sublime and seldom have I seen a film that depicts the beauty of cinema so consistently. There is also frequent doses of black humour which tend to heighten the impact of the film as a playful moment will expose a rather more dramatic flip side, but can also leave the audience feeling a tad nauseous, but then this may be the intent.

‘Sympathy for Mr. Vengeance’ is however a film of two halves. The first half focuses on Ryu’s point of view and glides along at a measured pace. The second half concentrates more on Dong-Jin’s point of view, and perhaps this is the problem with the second half. Dong-Jin’s character is introduced too late into the feature as the second half lacks the cohesion of the first. I also find it hard to accept that Dong-Jin would descend to the horrific torture unleashed upon his victims.

‘Sympathy for Mr. Vengeance’ certainly has a lot going for it. The problem is that it doesn’t deliver as much as it promises and doesn’t quite hit the mark as a complete unit due to a less cohesive second half and not enough time spent establishing Dong-Jin’s character. So near yet so far.