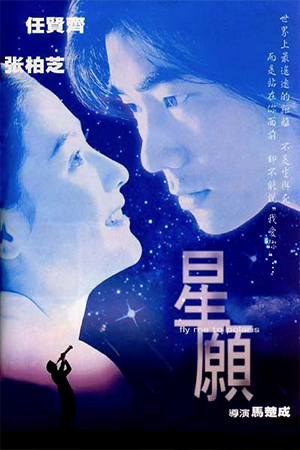 Cecilia Cheung remains one of Hong Kong’s most popular actresses, combining an ageless charm with proven box-office clout. Alongside Chow Sing Chi’s ‘King Of Comedy’, ‘Fly Me To Polaris’ is one of her earlier films that fully lodged her name in the minds of audiences and helped her ascend to the apex of the pecking order. It’s no surprise that this shamelessly sentimental romantic drama remains one of her most popular films, even proving a significant hit in other Asian countries.

Onion (Ren) is a resident at a home for those with special needs but, despite being blind and mute, doesn’t allow his disabilities to hinder his enjoyment of life. Key to this is his close friendship with nurse Autumn (Cheung) who visits him daily and benefits from the inspiration that Onion provides. It is inevitable, though, that this friendship should turn into love and Onion is utterly devoted to his beautiful friend and plans to reveal his true feelings to her. Tragically, Onion is killed in a terrible accident and Autumn is left distraught, especially because her own feelings are beginning to be clarified. A freak coincidence gives Onion a remarkable chance to return to Earth, though, and he is allowed to spend a short period of time there free from his former ailments. However, there is a significant flaw in this otherwise wonderful opportunity: although he will look exactly the same, nobody will recognise him and he will be physically unable to tell anyone who he really is. On his return he immediately tries to spend time with Autumn, though his new identity does make this increasingly difficult. Onion also succumbs to the urge of telling Autumn who he really is, but finds that he is indeed incapable of doing. Nonetheless, his attempts to win the heart of the woman he loves under his new persona continues and those around him, particularly old friend Jumboball (Tsang), begin to notice something very familiar about this newcomer. As time runs out for Onion’s brief return, Autumn gradually realises that the man she loved is the unusual stranger before her and that she must try to piece together the evidence that is there.

‘Fly Me To Polaris’ makes no excuses for its obvious emotional machinations and a storyline clearly designed to tug at the heart-strings. Nonetheless, however clear its intentions are, it manages to succeed with aplomb and turns the contrived into the magical. Therefore, what so easily could have been a series of clichés held together by its appealing stars proves to have enough style and substance to move even the hardest of hearts. It’s success is perhaps due to the genuine warmth of the cast; the leading pair are excellent as the tragic lovers, but the supporting cast is also filled with actors effortlessly playing sympathetic characters. Director Jingle Ma – for years a noted cinematographer – uses his past experience to create some memorable visual potency and conjure up a moving atmosphere that cuts through the inherent weaknesses of the film.

The nature of this commercial hit and its intentions to target the emotions of its viewers means that it doesn’t aspire to be high-brow art or a significant work of cinema. Critics have pointed to this as a weakness and some may argue that it’s nods to Hollywood classic like ‘A Matter Of Life And Death’ are transparent to say the least. ‘Fly Me To Polaris’ has enough merits to shrug off these criticisms though and is a stark reminder of what is lacking from much of today’s cinema – a film that is genuinely moving. With such modest objectives and a true power that reaches beyond its closing frames, this is a superior romantic movie that earns a strong recommendation for those prepared to shed a tear or two.