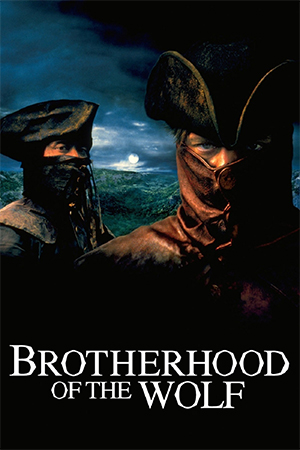 Loosely based on a true story, ‘Brotherhood Of The Wolf’ follows the adventures of Fronsac (Li Bihan) and his assistant Mani (Dacascos) as they undertake a mission from the King to seek out a mysterious beast that is terrorising the rural parts of France.  However, this is no ordinary beast for his jaws are twice the size of any wolf and he only prays on unarmed and defenceless women which seems just a little too intelligent for a blood-thirsty animal.  Using Fronsacs amazing powers of deduction and Mani’s talent for fighting, the two set about interrogating the population of the town in the hope that they can uncover the truth behind this mystery.

‘Brotherhood Of The Wolf’ is a fantastic looking film.  There I said it! This film looks great and aside from whatever else I thought of it, the cinematography is excellently handled with each scene looking more stunning than the last.  Unfortunately though, that was probably my most favourable memory of a film that really isn’t quite as good as the hype that surrounds it.  Perhaps being a Brit, which is probably the culture furthest from the French, I was never going to fully appreciate this film but even still, I found the dialogue and acting somewhat wanting.  This is mainly due to the fact that a lot of “padding” is used to fill in the sequences between the hunt for the beast and amazingly, the film still barely manages to create characters that the audience can warm to.  The poor excuse for a romantic subplot and the weak relationship between our two leads (although Dacascos really doesn’t get to act all that much) do little to hold your attention whilst you await the outcome of the mystery.  For me, the ‘Brotherhood’ mentioned in the title is a far more interesting discovery that is only touched upon as the film is drawing to a close but if I say any more then it is most likely I will give away the ending.

Forget that though, let’s get down to what you all came here for – the action!  Dacascos is obviously the major star here and his adaptability in the Martial Arts never ceases to amaze me.  We have seen him go from Capoeira to Karate to kung fu throughout his varied career with the greatest of ease and here he is given the role of a Red Indian (??) with substantial skills in fighting.  Despite what you may have heard though, there is actually very little action throughout this film but the short segments in which we get to see Dacascos he does look as impressive as ever, utilising a range of simple kicks mixed in with a few acrobatic flips.  Each scene is relatively enjoyable, if not slightly hindered by Gans’ sloppy direction.  The combination of distorting camera angles and excessive slow motion only reduces the viewer’s enjoyment which is disappointing as this could have been the film’s real saving grace.

What remains the most bizarre aspect of the fights for ‘Brotherhood Of The Wolf’ is the fact that the majority of the leading characters (Dacascos aside) are displayed with no ability in combat until the finale in which it suddenly appears everyone is a student of the Martial Arts.  This is particularly noticeable for the main character, Fronsac, who took no part in any of the film’s previous scuffles but is suddenly pushed to the forefront to flip his way around the screen as if he were Wong Fei Hung.  Personally, I felt it would have been more fitting to establish these skills earlier in the story rather than force them into the movie just for the benefit of an all action ending.  The truth be known, I don’t believe that the Martial Arts sequences were in the original scripting for ‘Brotherhood of The Wolf’ at all, as you can quite easily imagine the film without them.  It’s most likely that the presence of Dacascos and the possibility of international appeal was too great a temptation for the filmmakers to pass up so they were added as an afterthought.

Overall, I’d say ‘Brotherhood Of The Wolf’ doesn’t quite contain enough action to hold fight fans’ attention but also lacks the innovation to be anything more than a weak murder mystery. So ultimately, purveyors of each aspect will find something to dislike.  Although it is still entertaining and offers a far better blend of fights and France’s golden era than ‘The Musketeer’ did, ‘Brotherhood Of The Wolf’ still fails to completely convince me that two such opposite styles can successfully occupy the same movie space.