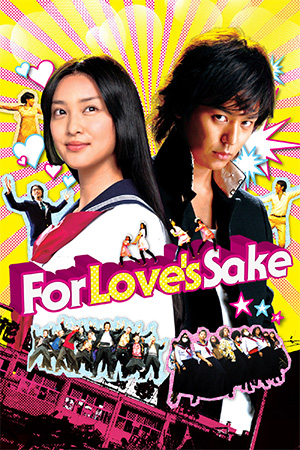 Genre jumping director extraordinaire Takashi Miike turns his hand at romance for this live-action adaptation of a 1970s Manga. I say turn his hand to romance as in actuality he balls his hand into a fist and punches it into the face of every single character as violence sits side-by-side with romantic earning, comedy musical numbers and (oh dear) melodrama. In fact, it is lead character Makoto (Tsumabuki) who punches nearly everyone in the face, a troubled loner from the wrong side of the tracks whose sole purpose seems to be to fight everyone he comes into contact with.  However, he has a guardian angel in the form of Ai (Takei) a sweet rich girl who is hopelessly devoted to and in love with Makoto. Sharing a secret bond from an incident in their childhood, the two youngsters can’t seem to get it together (mainly due to Makoto refusing to accepts Ai’s attentions) and their quest sees them taken from the heights of a prestigious prep school to the lows of a deranged and dangerous public school along with frequent musical numbers, the affections of various other suitors and come the end, all out gang warfare.

Working as a sort of parody of the romance genre, another reworking of the original Manga source material (it having already being adapted for film and TV before) and as a hyper violent teen high school flick, ‘For Love’s Sake’ is just as eclectic, rousing, frustrating, exciting and boring as many of Miike’s other works. With a tone that won’t sit still, moments of pure genius (and even tenderness), moments of tedium (far too many unfortunately) and more musical numbers and fist fights than I can count, ‘For Love’s Sake’ is not entirely successful with its intentions but it sure is memorable with them. At well over 2 hours the running time is so over stretched that not even zippy musical numbers and brutal brawl ups can gloss over the fact that the film is just too long. The first hour is crammed with musical ditties, general silliness and the odd dip into unpleasantness and weirdness that Miike is so fond of. The second half, once everyone has relocated to the rundown school, affections are made clear and the gangs go hunting for Makoto, proceedings become more serious, violent and, well, a little strange. Not that the tonal shift is completely unsuccessful but what at first looks like a bonkers comic strip romance then turns into a darker fight for survival film that may surprise some viewers (though not if you are a big fan of Miike’s work: as you’ll probably love it!).

However, under the musical theatrics, melodramatics and face punching violence there is a heart to Miike’s twisted romance. Ai (superbly played by Emi Takei) is endearingly sweet as the love struck teenager who is never distracted from her goal of getting Makoto back on the straight and narrow so they can be together: even when she is threatened with disfigurement from sulphuric acid! While Makoto comes off as, well, a bit of a dick to begin with we warm to him as the film goes along and when his past is revealed in the later scenes there are some genuinely moving moments showing what happened to and what became of his family. Don’t worry; Miike doesn’t go all sappy come the end as events lead to a series of massive fights including one where Makoto takes on a gang full of baseball bat brandishing high school girls. In fact the last half hour or so reaches an exciting crescendo of fights, emotions, musical numbers and what appears to be mini stage play (!) that it’s a pity the rest of the film isn’t as entertaining as this last section. Well the musical numbers are fun, the film is bookended by some stylish anime sequences and there are some entertaining supporting characters (Gumko: a girls who chews gum!) meaning there are moments of stylistic awesomeness. However, everything is just unnecessarily stretched out over a way too long running time meaning ‘For Love’s Sake’ has sporadic moments of brilliance but falls short of being the fast, fun and feisty musical action teen romance it could have been.