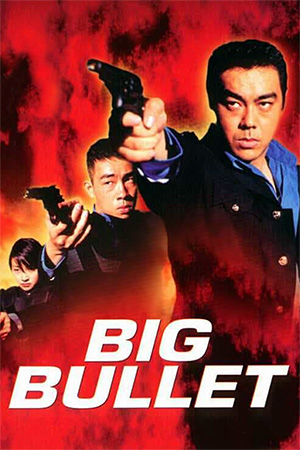 Hong Kong cinema went through dark days during the mid-90’s. There was a clear lack of imagination and innovation in the film industry and the golden age of the 80’s was just a distant memory. However, there were a few films that re-addressed this balance and brought back some quality. ‘Big Bullet’ can be counted among those films.

After an altercation with a superior, Lau Ching-Wan is demoted and put in charge of an assorted team of cops. Among them are a by-the-book cadet (Chan), a gun-loving youngster, an experienced veteran and a spirited policewoman. When a mainland gangster is freed by his partners and constantly evades the police, this unusual team set out to bring them to justice. This leads to an all-out finale in a military base where the villains are finally apprehended.

Although the state of Hong Kong cinema is much improved now, it’s hard to forget the wretched state just a few years ago. ‘Big Bullet’ really stood out when it was released and remains a class act. Lau Ching-Wan is again the rebellious cop, but here he seems to be enjoying his role. Benny Chan has assembled a great cast, particularly the five stars who really gel together. Naturally Anthony Wong and Yu Rong Guang make truly intimidating villains that the audience can really sneer at.  A gem from a few years ago.