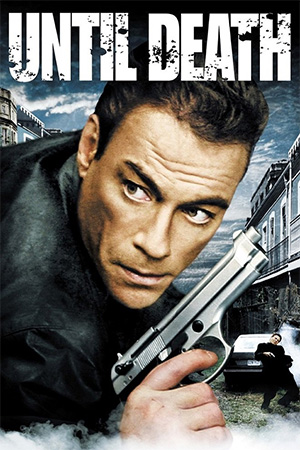 Van Damme is a dirty cop. A no good, lying, cheating heroin abusing dirty cop. He sneers, snarls and spits his way through the first half of Until Death, seemingly trying to take down master criminal, Stephen Rea. But really all he does is get several cops shot, another fired from his job and then pushes his wife into the arms of another man. His seedy life style and corrupt law enforcing soon catch up to him, when Rea and his goons leave him for dead with a bullet in his brain. Then things kind of go all Regarding Henry. Van Damme slowly recovers (well, quickly really, as this is a movie), discovers he is nice guy and still loves his wife after all. Decent acting from Van Damme ensues but it can’t save the plodding pace and slapdash direction which all of a sudden ends with a big shootout and Rea hamming it up ten fold.

‘Until Death’ was supposed to be Van Damme’s shot at serious acting and while he does well, the film eventually falls apart due to some misguided stylistic approaches. Van Damme is good, especially as the drug addicted cop, reigning in his kicking muscles and getting to flex his acting ones. It’s when he switches to recovering cop, you begin to wish he would just get on and kick someone in the head. It’s good to see the action star stretching a bit and even appearing in a non martial arts movie (no fights here, I’m afraid) but the film just plods along, occasionally livened up with some gunplay. The fire fight in the diner is particularly good. Plus, Van Damme was actually better in Wake of Death and In Hell, two films which are far grittier than this.

The pacing and editing don’t always help, the director never quite getting the tension this kind of film needs. Still there is a bit of cool camera work and for all the scenes that don’t work, there is a few that stand out including a memorable one where Van Damme is caught and tortured. It’s a shame ‘Until Death’, as a whole, isn’t as memorable. Van Damme is still making good films (the aforementioned Wake of Death and In Hell) and this one isn’t bad (certainly better than Derailed or The Order) but could have been so much better. Still, it’s good to see the Belgian bruiser trying something different and at least succeeding on the acting front if not the action front this time around.