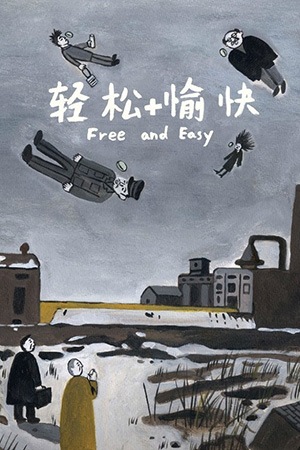 Into a wintery, sparsely populated Chinese town, a travelling soap salesman arrives. He encourages his first client to smell the aroma of the soap and, after said client does this, he falls over unconscious and the salesman steals his money. Police ‘investigate’ as more and more residents become victims of this crime while the other oddball inhabitants – including a fraudulent monk and a tree baron who has lost his trees – look on, flitting in and out of the drama.

‘Free & Easy’ promises a mix of absurdism and black comedy, a combination that Chinese cinema – any cinema for that matter – rarely tackles. Unfortunately the result is ninety minutes of stupefying inertia rather than a Python-esque/Aki Kaurismaki style film full of vim and vigour or, in that latter’s case, dead-pan wit. Of course to try and pigeon-hole something as nebulous as an absurdist aesthetic is foolhardy, but you should at least expect it to be mildly diverting. ‘Free & Easy’ is a moderately amusing one minute sketch stretching to feature length and you can feel every one of its ninety minutes pass as if they’re being pulled from your own flesh.

It is with a great deal of fear that I criticise ‘Free & Easy’ as I immediately open up myself to accusations of ‘He doesn’t get it’. This may well be true. However, much as I enjoy absurdist cinema, this effort is woefully insipid; it commits that worst crime of any piece of surrealism and ends up being a massive bore. Yes, the composition of the shots are nice and the director understands ‘cinematic language’ – these are virtues that fans of the film have been keen to express. Yet if good film-making is now qualified by knowing how to structure the mise-en-scene rather than how to put some original ideas in front of the lens then I struggle to have much interest in cinema.