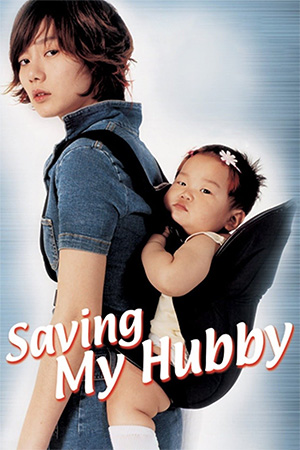 Despite a weak box-office showing during a time when Korean cinema was enjoying a remarkable spurt of critical and financial success, ‘Saving My Hubby’ has since achieved minor cult status, perhaps due to popular actress Bae Doo-Na. While the title ‘cult hit’ brings with it mixed expectations, neophyte director Hyeon Nam-Seob comes up with a very appealing treat.

Geun-soon (Bae Doo-Na) and her young husband find their roles as a fledgling couple hard to come to terms with, even more so when their young daughter comes along. On a traumatic day when her husband starts his new job in typically awkward fashion, Geun-soon finds out that her in-laws are to visit the next day at the ludicrous time of 4am. Keen to impress them, Geun-soon arranges to cook an elaborate meal though such grand ambitions are hampered by her young daughter’s need for attention. The evening takes a turn for the worse when a stranger phones Geun-soon demanding 1.7 million won for her husband’s apparent session of binge-drinking. Strapping her wide-eyed baby to her back, the industrious young mother heads off into the big city to rescue her beloved and get back home in time for the big visit. Geun-soon becomes increasingly bewildered by her surroundings and, as she meets numerous Korean eccentrics, manages to incur the wrath of one of the city’s major gangs and start a underworld war all in the space of a few hours.

Aided by the zany energy that infuses many of the very best Korean comedies, ‘Saving My Hubby’ is a crazed hybrid of genres that only Asia seem to be able to pull of with real aplomb. Director Hyeon Nam-Seob takes a very fresh, spirited approach to the material, using age-old tricks that somehow appear to work in this instance. Managing to strike a balance between the quirky and the mundane, Hyeon slips inspired moments of surrealism into the storyline without endangering the vitality of the work. It’s one of those films that just sweeps the viewer along in its frenetic slipstream.

Admittedly, ‘Saving My Hubby’ starts uncomfortably. The acting appears hysterical and forced while the very obvious farce set-ups are from a bygone age. In some ways the uneasy opening is a reflection on the relationship that the two leads are adjusting two, but it still struggles to be involving. Pleasingly, Hyeon Nam-Seob’s effort quickly finds its feet as the husband and wife team’s affection for each other is fleshed out and the audience is drawn to their unlikely heroine. Hyeon then adds subtle layers to the characters, introducing flashbacks to Geun-soon’s past to help cement our empathy, also adding a bedrock of normality before the mayhem begins.

The literal title of this film, ‘Be Strong, Geun-soon’, may not be as cute as the original, but it is a good indication of what our heroine will face. When the spotlight becomes firmly focused on the talents of the lead actress, ‘Saving My Hubby’ slips into top gear. Taking a cue from the sublime ‘After Hours’, this comedy takes its appealing leading character and throws her in an alien environment, a distorted version of a Korean city, then brings her into contact with weird and wonderful nocturnal creatures. While Western films make bold claims about strong lead roles for women, rarely do they manage to create such a realistic blend of gumption, gutsy determination and tender vulnerability; Geun-soon is not emasculinised nor is she extraordinary – she is merely a normal woman in a curious world. Such a powerful lead can only succeed in carrying the story if the actress has the ability to balance these attributes, something that Bae Doo-Na accomplishes expertly. Early scenes may have her as a lachrymose, shrinking violet, but character and actress grow into a very watchable presence that will have viewers rooting for her. Despite the underwritten husband, the site of Bae Doo-Na running through the neon-lit city streets with a bemused baby strapped to her back is quite a sight to behold.

There are many minor sub-plots within ‘Saving My Hubby’ (the return of a legendary gangster – the preposterous ‘White Snake’ – to his old neighbourhood is the most obvious one), but it is essentially a one woman show. Such a gamble pays off and distracts us from a few weaker moments when the action is not focused on Geun-soon. Her adventures may not have attracted the crowds on its Korean release, but this is still a comedy with style and confidence in spades. Recommended for anyone wanting bubbly entertainment.