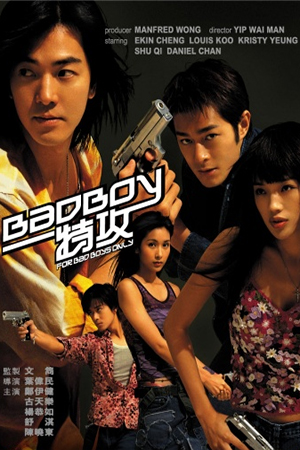 At the end of the year 2000 there were a number of films vying for the box-office dollars of the Hong Kong public. Among them were ‘Gen-Y Cops’, ‘China Strike Force’, ‘A Fighter’s Blues’ and this star-studded offering from director Raymond Yip. The film follows the misadventures of ‘The Bad Boy Squad’ – a detective agency who specialise in finding lost loves. The agency is staffed by a trio of hip poseurs: King Chan (Ekin Cheng) is the Casanova of the team as he divides time between cases and the more important task of the endless amount of women he meets; Jack Sham (Koo) is the more brooding member of the team and his own goal is to find that elusive ‘perfect’ woman he’s always searched for; completing the gang is King’s sister Queen (Yang), a hippychick helper who has a secret love for Jack.

The Bad Boy Squad are asked by a young artist (Chan) to find his lost love Shadow (Qi – in one of her numerous roles in this film) who seemingly disappeared from the hair salon she worked in. This straight-forward case soon becomes more and more intriguing for the trio as they are then asked to find a once famous Asian athlete who looks exactly like Shadow. Another twist comes when King meets and subsequently saves an unusual young woman called Eleven who again looks like the missing Shadow. King also begins to wonder why the beautiful Eleven has the apparent mental age of a child as she questions the simplest and most basic things he asks. All is revealed when a scarred Shadow finally appears from her time in hiding and tells the Bad Boy Squad what really happened to her.

‘For Bad Boys Only’ starts – in a beguiling way – as a combination of ‘Tokyo Raiders’ and ‘City Hunter’ with bright and breezy locations and flashy camerawork dominating the opening 15 minutes. However, this encouraging start soon runs out of steam and the productions true colours are finally shown when the convoluted plot kicks in. This confusing storyline could have worked if the film had the pace and vibrancy that the trailer seemed to imply; instead, the audience must sit through endless uninvolving romances between the equally uninvolving characters. When the film does get bogged down in these romantic scenes, the deficiency of the characters is well highlighted. Ekin Cheng’s King is tiresome in his constant betrayal of the women he meets and is certainly not as charming as he would like to think. Louis Koo, who has proved that he is capable of strong performances in films like ‘The Suspect’, is merely asked to smoke his own bodyweight in cigarettes and look mournful, the latter growing increasingly annoying as the film goes on. Kristy Yang adds little to her uninteresting character, but she is not helped by a poodle haircut that may have been done for a bet. Romantic sub-plots are not impossible to pull off with style, but the audience must care about the characters and be able to identify with them; For Bad Boys Only fails in all of these areas. When the action does come along it merely adds to the disappointment with director Raymond Yip obscuring it with his self-indulgent camera-work – something that Hong Kong cinema was beginning to grow out of. The film though has some good special effects and does retain a certain entertainment value, but it stands as a masterclass in the way a director’s lack of self-control can hinder a film’s progress.