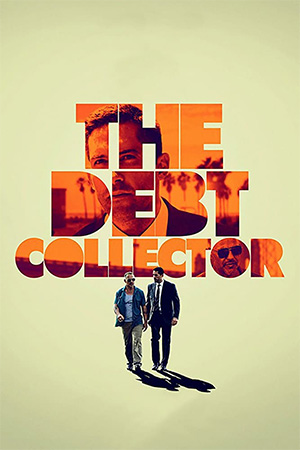 Director Jesse Johnson and star Scott Adkins continue their recent run of team-ups (following ‘Savage Dog’ and ‘Accident Man’) for the bruising belter, ‘The Debt Collector’. Crafting a superior slice of pulp noir action, the two deliver a rousingly entertaining fight flick that packs as much punch with character and nifty dialogue as it does with fists and high kicks. Kicking off with a cheeky wink to the martial arts films most of us grew up with, it sees Adkins dojo owner French defending his barely scraping by establishment from some shady characters by, well, fighting them of course. However, realising he can’t keep hold of his school with just his mad fight skills he turns to mate Alex (Pare) to hook him up with local loan shark Tommy (Kulich) to earn some extra cash. Thus French is thrown into the dangerous world of debt collection, teamed up with the seasoned Sue (Mandylor), and sent on a wild weekend of dust ups, near escapes and bickering bonding.

‘The Debt Collector’ is a fun ride buoyed by the excellent performances and chemistry of its two stars: Adkins and Mandylor. The unlikely duo form an uneasy alliance as they’re thrust together in order to collect money from a series of lowlifes who are reluctant to pay up. Obviously relishing the chance to dive into the meaty, pulpy dialogue and witty exchanges the two excel at the banter, the bust ups and blossoming respect they begin to form for one another. Mandylor is on fire as the tough, gruff, seen it all before Sue spitting out droll put downs and wisdom as often as Adkins throws face-breaking punches. The chemistry between the two lifts the film from being just another knuckle-duster and while one can ultimately guess where their journey is taking them, it’s no less enjoyable thanks to the well rounded characters the two stars create.

Kudos also to Johnson for vibrantly embracing and creating the pulp world his two protagonists navigate through. Effortlessly switching between the light-hearted banter and the violent altercations, Johnson crafts some entertaining pulp tinged action all lovingly lensed in the Californian sun by DP Jonathan Hall. The flick always looks great despite a seemingly low budget and the action, as one would expect, is stellar. Befitting the style, the action here is more meat and potatoes fisticuffs rather than epic kung-fu duels or, say, the insane action seen in ‘Accident Man’. That’s not to say it’s any less entertaining or accomplished as once again Adkins gets put through his paces and shines in an escalating number of punchy, crunchy beat-downs. Mandylor is no slouch either, getting in on the action also, and letting his fists fly to violent effect.

‘The Debt Collector’ is a hoot and another notch on the action hit belt of Adkins and Johnson. Sure, the finale may be a bit anti-climactic for some (considering all the ace action and banter that has come before) and the slaughterhouse metaphor a little heavy handed but props to the makers for crafting something a little different and for delivering a film that balances character, drama and action so well. A refreshing reminder of how action films used to be made where brains, brawn and banter all play a part in shaping a satisfying story.