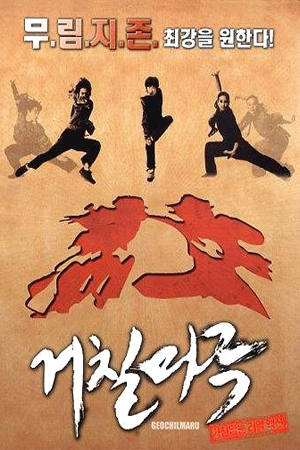 Although Martial Arts is primarily about self defence and physical conditioning, some pupils prefer to argue about which technique is the most effective in actual combat.  When eight masters of various styles cross paths on a website, they decide to meet up and pit their skills against each other in an effort to prove who is the greatest fighter.  Tae kwon do, Kung Fu, Muay Thai and Wu Shu all go head-to-head in a no holds barred tournament in an effort to to settle the arguments once and for all. The prize for the overall winner will be the chance to duel the mysterious and undisputed master known only to the world as Geochilmaru.  Will our competitors battle with honour and dignity, or will the name of the game be tactics and dirty tricks?

There’s something about films that utilise the internet as their basic premise that really bugs me.  I realise that this is a somewhat bizarre statement coming from someone who is using the internet to print these very words, but within movies it often feels like little more than an easy excuse to fill in the gaps.  Never has this been more true than in the case of ‘Geochilmaru’, a film that not only relies heavily on the “internet excuse” but also seems to have absolutely nothing else to offer. Forget characterisation or depth, the only idea the writers seem to have had is that a group of fighters will meet on the internet and decide to lay the smack down. Unfortunately though, there’s still plenty of running time left to fill and the only so-called entertainment comes in the form of pathetic dialogue exchanges and long location shots. To make matters worse, the acting talent leaves a lot to be desired and it’s clear that the majority of performers were picked for their physical feats rather than any kind of thespian ability.

For a film that is crying out for awe inspiring action sequences, ‘Geochilmaru’ sadly fails to deliver. Most of the choreography is exceedingly raw and choppy, and the majority of the most gifted performers are bizarrely knocked out in the early rounds. There’s also a very obvious pattern to the combat, with each fighter pointlessly dancing around for a few minutes before making a calculated strike. Presumably this was intended to add an air of realism but the only effect it has is to slow down the pacing and ruin any hope of tension. The only minor positive comes from the soundtrack, which makes use of a number of rather funky, upbeat dance tracks to help set the mood.

If you’re absolutely desperate to find another tournament style fight flick, then you may be able to squeeze a few drops of entertainment out of ‘Geochilmaru’. For everyone else though, there isn’t anything particularly memorable here and you’re probably better off re-watching ‘Enter The Dragon’.