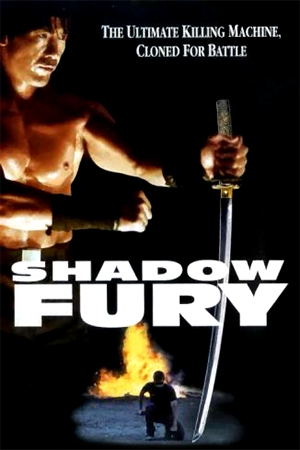 As a fan of 80s style Hong Kong action, I am always looking forward to any film that promises to deliver high tempo fight scenes and insane stunt work. I am a big fan of the Alpha Stunts team, and the choreographer of this film is a regular cohort of that group. As a result, I have been looking forward to seeing it ever since I saw the trailer on my preview copy of ‘Wicked Game’ many moons ago.

I am sorry to report that ‘Shadow Fury’ does not live up to my expectations, nor does it equal some of the other productions Alpha Stunt team members have been attached to in the past such as ‘Wicked Game’, ‘Guyver Dark Hero’ or ‘Drive’ to name a few. Although the fight scenes contained within the film are typically well choreographed and executed, everything else is below par, even for a straight-to-video flick.

The plot is ludicrously generic and muddled, centring on the futuristic theme of clones being used as killing machines. This could be a useful backdrop for the high-octane stunt work, but only serves to slow the film down as it becomes increasingly concerned with amateurishly tackling themes of human morals and loyalty. The dramatic performances are often cringeworthy and the characters more like caricatures, which might work if this was supposed to be a comedy, but it is only funny in a bad way. The lead character played by Sam Bottoms is wholly unlikeable and, as a result, lacks the empathy from the audience needed to make his whining bearable. Funaki as the clone Ninja killer is actually pretty good, but probably only because he is the silent, moody type and flits from antagonist to protagonist with ease.

In conclusion, I only recommend ‘Shadow Fury’ to Alpha Stunts completists like me, as although the infrequent fight scenes are fun to watch, the rest of the running time drags along too painfully for most.