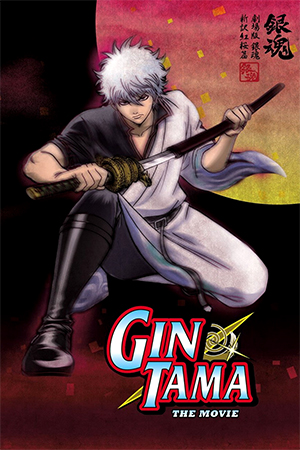 Gintoki, Kagura and Shinpachi are a ragtag team of friends who make up the band of happy helpers known as Odd Jobs. In the past they’ve undertaken a lot of strange work, and in a feudal Japan that’s been conquered and colonised by aliens, the term “Odd Jobs” really means ODD jobs. But when the team are hired to track down a dangerous sword known as the Benizakura, some slightly suspicious secrets from the shadows of Gintoki’s samurai past come back to haunt him…

If you’re feeling a little lost because you’ve never seen or heard of ‘Gintama’, then I wouldn’t feel too bad. Unlike a lot of the more internationally well-known Shonen Jump series, such as ‘Dragon Ball’, ‘One Piece’, and ‘Naruto’, ‘Gintama’ is a manga-turned-anime that is less about action and more of a home grown, off-the-wall comedy. It is for this reason that the show is often difficult to translate, and is probably not as easy to warm to as an all-out actionfest. However, if you give the series a chance then I’m sure you’ll soon learn to appreciate its brilliantly random combination of pop culture references, crude gags and occasional smatterings of action.

That being said, there are times when ‘Gintama’ adds a serious edge to the comedy and decides to insert a continuous story arc. The Benizakura arc is just one such segment and this first movie is basically an amalgamation of several episodes from the anime. As you would expect, this means that hardcore fans of the show will already know exactly what to expect, and there isn’t exactly a great deal that is new here. Sure, they’ve finally given the animation a widescreen aspect ratio and lengthened the fight during the finale, but you can’t help but feel the whole thing is somewhat unnecessary.

While this is clearly a disappointment, ‘Gintama: The Movie’ does still give the viewer a chance to appreciate one of the finest arcs from the show. Aside from offering an abundance of action, this particular story provides some genuinely interesting and, at times emotional insights into Gintoki’s backstory. These moments go some way to helping us understand why he is so determined not to see his friends get hurt, as well as giving additional exposure to his comrades from the war. There’s also quite a bit of well-handled action, especially the final duel which sees Gintoki letting his instinct take over and beating the odds to win out in the end. All in all, a very solid slice of anime that really gives ‘Gintama’ some additional depth.

Although it is undoubtedly still an enjoyable arc from the show, the decision to make ‘Gintama: The Movie’ a collection of existing episodes feels somewhat disappointing. Essentially there isn’t really enough that differs from the anime to make it worth retelling, and when condensed into this format it just seems to lose a little of that original spark.