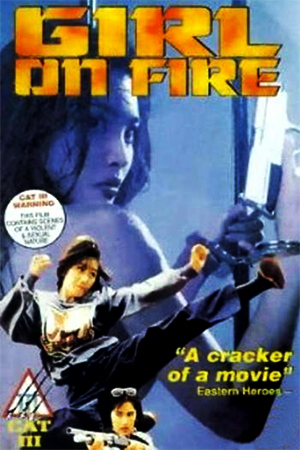 Hong Kong Category III exploitation that now seems somewhat tame and a little ridiculous compared to when it was originally released, ‘Girl On Fire’ still features enough sleaze and some cool kung fu action to warrant a viewing or two for aficionados of weird action flicks. Ok, ‘Girl On Fire’ does have a few shocking scenes but it’s hardly the most exploitative of the notorious Category III genre that reached such pervy and distasteful heights as ‘The Untold Story’ and ‘The Ebola Syndrome’ back in the 90s.

It’s actually just a run-of-the-mill kung fu cop story about a couple of police officers trying to take down a sadistic arms/drugs dealer. However, this being a Category III flick along with all the fisticuffs there are regular smatterings of kinky sex. While it might not be as shocking as it seemed when first released, ‘Girl On Fire’ still see-saws between displays of over-the-top violence and sex, often within the same scene. It’s not all that graphic, well except for an eye gouging and people often being killed mid coitus, but otherwise it’s just a lot of vigorous bouncing.

Other than that, ‘Girl On Fire’ is a fairly humdrum affair. There is certainly a sleazy and low budget feel to proceedings, which amps up the exploitation feel but if you took out all the nudity and enthusiastic bedroom antics, then this is just a sub par Hong Kong action film. To be fair the action isn’t too bad it being a nice mix of kung fu combat and gunplay. It gets better as the film proceeds, ending with the requisite action blowout. The fights, featuring Hong Kong stalwarts Ken Lo (‘Drunken Master 2’) and Billy Chow (‘High Risk’), feature some sharp choreography with highlights including a brutal battling babes brawl and a finale which includes mucho martial arts mayhem and even a pair of dueling diggers (and is just as ridiculous as it sounds!).

Not the best Hong Kong exploitation flick out there and far too lethargic and serious to recommend as over-the-top fun, ‘Girl On Fire’ is nevertheless entertaining in parts and a rare slice of questionable exploitation from Hong Kong’s crazier days.