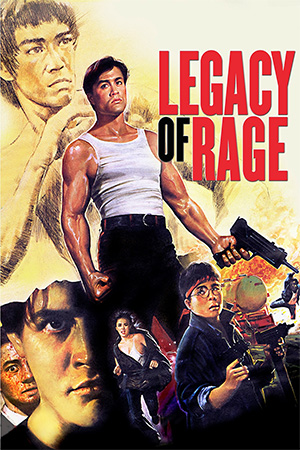 ‘Legacy Of Rage’ has often been described as notable for teaming the son of Bruce Lee and his co-star on ‘Enter the Dragon’ Bolo Yeung (aka Yang Tze). But since Bolo spends approximately five minutes on screen it is probably more notable that two of the leading stars and one of the action directors met with tragic untimely deaths. Brandon, son of Bruce Lee notoriously died of a gunshot wound on the set of ‘The Crow’ when a live round was mixed with blanks on March 30th 1993, bringing with it talk of a Lee family curse as his iconic father also died prematurely under questionable circumstances. Regina Kent also had an early demise as she died of brain cancer in 1999. The car action director Blacky Ko would also die of an asthma attack brought on by heavy drinking in 2003.

‘Legacy of Rage’ was Brandon’s first starring role and his only Hong Kong produced picture. He wanted to make a Hong Kong film because he had such high admiration for the action films produced there. It would also serve as a valuable portfolio piece to help him obtain more high profile roles in the west. It would be another four years before he would star in the appalling and very low budget ‘Laser Mission’ (a.k.a. ‘Soldier Of Fortune’). From there he would take on the main supporting role in ‘Showdown in Little Tokyo’ (From Mark Lester the director of Schwarzenegger’s ‘Commando’) in which he really makes a show of leading man Dolph Lundgren. Then would come his first full lead role in a Hollywood picture. ‘Rapid Fire’ turned out to be a surprisingly good martial arts action adventure by Hollywood’s standards, by which time Brandon was starting to show how he was maturing as an actor. Finally he star in a major Hollywood comic book adaptation which quite likely would have launched him into the A list of Hollywood actors. ‘The Crow’ would turn out to be Brandon’s finest hour. Sadly the role would cost him his life as history would repeat itself in the Lee family legacy.

Brandon (Brandon Lee) is working two jobs hoping to buy his dream motorcycle. But his dreams are soon shattered when his best friend Mike (Michael Wong) uses Brandon as a fall guy when he has greedy corrupt cop Sharky Kau (Lam Chung) killed. Brandon is sequentially tried and sentenced to 8 years in prison. Meanwhile Brandon’s fiancée May (Regina Kent) fights off an attempted rape by Mike who has had designs on her since he had first laid eyes on her. Scared and carrying Brandon’s child, she eventually agrees to hide in Brazil with Mr Wong who treats her as a daughter. After Brandon is finally released, May returns to greet him. However , unaware that she was pregnant when he was sentenced, he immediately assumes that the boy she has in tow belongs to Mr Wong and walks away. May then has the misfortune to encounter Mike who has since taken over the criminal business from Uncle Yee (Chan Wai Man). Mike then has May and her son kidnapped. When Brandon hears of this he launches an all out assault on Mike’s gang.

Made the same year as John Woo’s seminal ‘A Better Tomorrow’ , ‘Legacy of Rage’ followed in the wake of heroic bloodshed. The gunplay is somewhat more acrobatic albeit less refined and more rough round the edges than the work of Tung Wai on ‘A Better Tomorrow’. Martial arts sequences however remain infrequent, brief and basic. In fact it is quite possible the only reason there is any martial arts at all is due to the casting of Brandon as gunplay is clearly the order of the day.

‘Legacy of Rage’ may not even be in the same category as ‘A Better Tomorrow’, but it  makes for relatively pleasing pop entertainment.