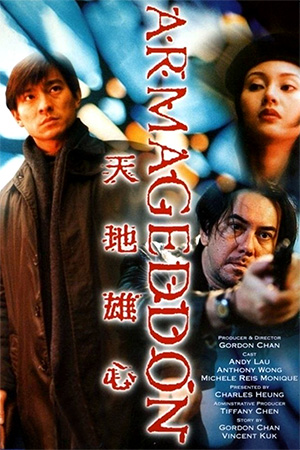 This late 90s effort from prolific Hong Kong director Gordon Chan (‘Fist of Legend’, ‘Painted Skin’) is a muddled mess. Part ‘X-Files’ type mystery, part drama and part tiny smidgen of action, ‘Armageddon’ certainly has a novel concept at its core but never develops this concept beyond a monotonous series of talky scenes and Andy Lau moping about. He plays technical whiz and “walking encyclopaedia” Dr Ken who is called in to investigate the baffling deaths of some of the world’s leading scientists.  The authorities believe a mysterious group known as the Brotherhood of Technology may be behind the deaths and with his cop buddy (Anthony Wong) in tow, Dr Ken attempts to find out why these men are being killed. Oh yeah, and Dr Ken’s dead girlfriend (Michelle Reis) keeps popping as a ghost to offer advice and scare the crap out of the other characters! This all leads to a completely bewildering ending which takes in God, the meaning of death, everyone being incinerated and, well, a whole load of other weirdness that doesn’t make much sense/add up to much.

Apart from not knowing what it wants to be (an ‘X-Files’ mystery or a romantic drama or a serious look at life, death, technology and God!), ‘Armageddon’ just never finds any sense of pace or tension. While the film opens in an impressive manner (Swat team storms a building only for their target to spontaneously combust and melt before their eyes: cool!) nothing much really happens. Once Dr Ken is called in to investigate he spends a lot of time moping around having flashbacks about his dead girlfriend, having endless “serious” conversations with his team about life, death, technology and God and going for noodles with Anthony Wong. When the ghost of his dead girlfriend starts turning up it just leads to a whole lot more “what?” and “eh!” and even a late act sojourn to Prague fails to enliven proceedings.

Despite his character’s dour personality, Lau shares good chemistry with Wong and the two make proceedings a little more bearable as they banter with one another and director Chan certainly shoots his film in a striking fashion: the widescreen night photography giving the film an almost otherworldly and captivating feel. Chan also gets points for not stuffing his film with pointless action (there really isn’t any save for a quick scrap Lau and Wong have with some bad types) obviously going for a more thought provoking and slow burn approach and proceedings, thankfully, never succumb to histrionics or over-the-top melodrama.

However, the lack of urgency and often confusing nature of the plot means ‘Armageddon’ is never as engaging or exciting as it could have been. More of a (somewhat) interesting oddity from the careers of Lau, Wong and Chan than the dramatic mystery/sci fi ride it should be.