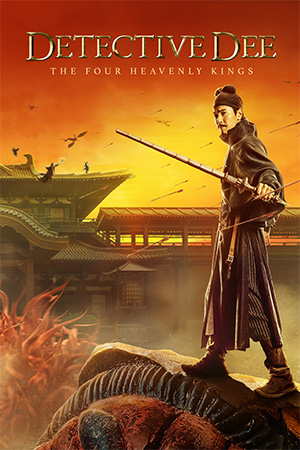 Tsui Hark returns for a third go around in his fantasy blockbuster franchise, sending the titular Dee on another eye-boggling, mind-warping, wuxia-infused adventure. While the first instalment saw Andy Lau take on the title character, the first follow up, ‘Rise of the Sea Dragon’, saw a younger version of Dee (now played by Mark Chao) muddle his way through an assortment of fanatical situations. ‘The Four Heavenly Kings’ is a direct follow on from ‘Rise of the Sea Dragon’, with Chao and many of the core cast returning for another adventure which may just be the best in the series.

Due to his exploits in ‘Rise of the Sea Dragon’, Dee is rewarded the coveted Dragon Taming Mace: a near mythical and indestructible weapon. So coveted it is, that many a nefarious foe want to get their hands on it including Empress Wu (Carina Lau) who hatches a plan to steal it and discredit Dee using a band of mystical warriors. Coupled with the resurgence of a once deadly spiritual tribe, Dee soon finds all is not what it seems as sorcery weaves it evil way, and he and his fellow Bureau colleagues attempt to uncover the conspiracy and battle an ever increasing assortment of fantastical creatures and foes.

Much like the first two Dee flicks, ‘The Four Heavenly Kings’ is an often breathless fantasy blockbuster that doesn’t skimp on the wuxia action, CGI wonderment and imaginative scenarios. These days Tsui Hark is happy to play in the big budget, CGI sandbox and while his recent films have been a bit hit or miss, the ‘Detective Dee’ flicks have arguably been his most enjoyable blockbusters of late. While ‘Mystery of the Phantom Flame’ and ‘Rise of the Sea Dragon’ could be all over the place in tone and plotting ‘The Four Heavenly Kings’ finds Hark on more assured ground. Sure there is still a fair amount of convoluted plotting and subplot/secondary character development a-go-go which takes a while to digest as the narrative often rockets along, but on the whole this entry flows coherently.

Dee’s cohorts (Lin Gengxin and Feng Shaofeng) get fully fleshed character arcs and are just as integral to the plot and action as the lead, with Feng Shaofeng (as General Yuchi) all but stealing the film. This unfortunately means Dee feels somewhat like a supporting character in his own film but the team dynamic is a nice approach to this threequel and keeps the viewer guessing and often surprised as to where the narrative is going. While the film is packed with playful energy, energetic set-pieces and a good amount of silliness, ‘The Four Heavenly Kings’ also packs in a fair bit of menace, not least when the vicious Wind Warriors show up. A truly threatening foe, they add menace and bite to what is essentially a cartoon blockbuster, Hark wringing out some genuine tension every time they appear on screen.

As with the other Dee instalments (and most of Hark’s recent output), this entry is packed with CGI ingenuity which leads to some truly creative scenarios and characters. For the most part the CGI works (save for the odd wonky bit here and there) and blends into the environment and practical action well. Hark certainly can’t resist packing in as much CGI inventiveness as he can but come the finale it certainly works to deliver some truly eye frazzling action: complete with giant gorillas, squids and some sort of colossal demon made up of eyeballs!

If one isn’t a fan of this type of CGI laced, fantasy blockbuster then one is probably not going to get along with ‘The Four Heavenly Kings’ but if one is (and enjoyed the previous jaunts with Dee) then there is a lot of fun to be had here. Tsui Hark delivers a wickedly fun fantasy romp full of wondrous fight action and flights of fancy.