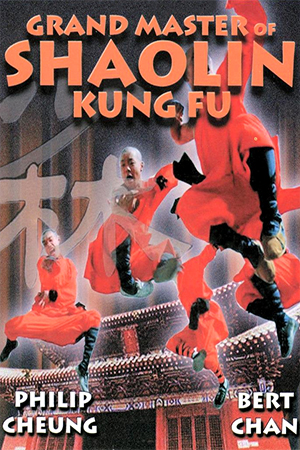 Director/producer and all-round criminal of film-making Godfrey Ho has been described as the ‘Asian Roger Corman’ – though sometimes he is more akin to Ed Wood. His low-budget, z-grade movies can be found on video store shelves and in bargain basements the world over, yet, until recently, the works of Liu Chia Liang proved to be far more elusive. As one would expect of the proudly-titled ‘Grandmaster Of Shaolin Kung Fu’, it is another attempt by Ho to cash-in on the then popularity of the word ‘Shaolin’.

The storyline is another mixture of special techniques, training sequences and cackling villainy, but Godfrey Ho adds his own brand of surrealism to the proceedings – moments that make Robert Tai look like Ken Loach. One such crazed idea has a fighter disabled by a flying pigeon unleashed by a heinous arch-enemy; the way the bird succeeds in doing this will not be revealed here, but it’s worth staying with the film to see.

The chances that this could’ve been a ‘so-bad-it’s-good’ film are undermined, however, because this is occasionally competent in its construction. That’s not to say that this is ever anything other than a schlocky piece of genre fodder though, but at least there are instances of skill (if that’s not too strong a word) on display here. Though the fight scenes are slow and pedestrian, especially considering it was made in the early 80s, they do indicate that a choreographer actually spent ten minutes or so designing them – which is five minutes more than the scriptwriter needed. ‘Grandmaster Of Shaolin Kung Fu’ is a two star film in every department, but that’s half a star more than a Godfrey Ho production can usually expect.