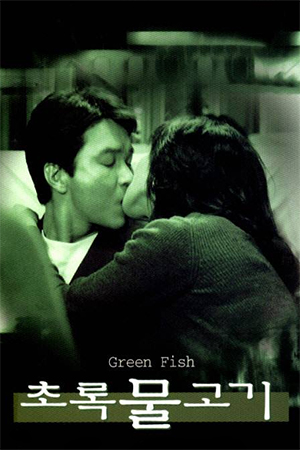 While it covers familiar territory, ‘Green Fish’ is a laid back and often enjoyable slice of Korean drama that seems refreshing thanks to a distinct lack of unpretentiousness and old school filmmaking. The story of a young man recruited into the gangster world with the promise of making money only to see him change into a violent person does not break new ground in originality but this late 1990s flick is watchable due in part to some fine acting and an un-flashy approach that never tries to make the gangsters or the filmmakers look cool.

Makdong (Han Suk-kyu) has just been released from the army and is returning to his humble home when he rescues a woman from some pestering thugs. Said woman, Mi-ae (Shim Hye-jin) tracks down Makdong to thank him and he goes to see her in the nightclub she sings in. At first shunned by the gangster types she affiliates with, Mi-ae’s boyfriend Kim Yang-kil (Meong Gye-nam) takes a liking to Makdong. Kim just happens to be the head of the local gang and recruits Makdong to do the odd job for him. Makdong proves adept at his new role and makes his way through the ranks with rapid speed. This, naturally, irks the other members and he soon finds himself battling his new “brothers,” his aptitude for violent confrontations increasing and his feelings for Mi-ae growing.

The most appealing aspect of ‘Green Fish’ is its determination not to make anything appear cool. After so many gangster movie’s (both western and eastern) that persist on presenting the violent gangster world as “cool”, ‘Green Fish’ does the opposite and presents it as a pretty mundane existence, just with the potential to make a lot of fast money. There is no posing, cool montages, gangsters talking about their favourite movies or any kind of romantic vision of the gangster world. The violence is never glamorized either and despite there not being an abundance of it, when the violence happens it sticks in the mind for its painful impact rather than its cool styling. For instance a powerful scene where Makdong kills a man in a restroom and then cleans up the blood laughing giddily and trying to hold back tears as he realizes what he has done and has no idea how to act. Likewise, his relationship with the gangster’s moll avoids familiar trappings as she is pretty much a drunk and the two, Makdong and Mi-ae, seem pretty inept at trying to escape the crappy lives they find themselves falling into.

Credit should also go to writer/director Lee Chang-dong for resisting the temptation to jazz his film up with tricksey editing, flashy camerawork and all kinds of film school flashiness. Still nicely shot, the flick has an almost 70s feel to it in terms of style and storytelling as the story takes time to unfold. This is perhaps also the film’s major downfall. Proceedings never hurry along, meaning the slow approach may not be to everyone’s taste. The familiar territory of the film’s narrative also holds few surprises (despite characters not fitting the stereotypical form) and a good ten or fifteen minutes could have been shaved off as at two hours, ‘Green Fish’ is a little too long telling its story. Still, the excellent acting, especially from star Han Suk-kyu, and the easy going approach give ‘Green Fish’ a style all of its own and it’s certainly worth seeking out as it is a lesser known Korean drama.